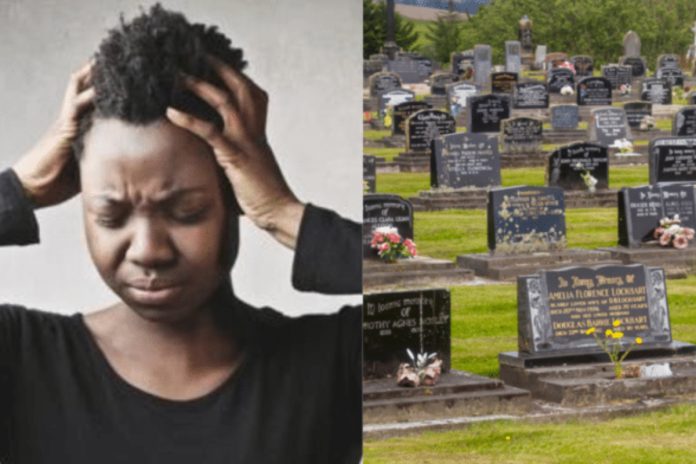 After learning that her spouse had passed away two years before to their engagement and marriage, a mother of three from Nigeria has been left in a state of shock.

A user using by the handle @peace igho posted this terrifying and unsettling account of her neighbor’s experience after discovering she was secretly married to a deceased man.

According to the account of the tweep, the woman found out an extraordinary background about her husband after visiting his town upon several pressures exerted on him to allow her meet his relatives.

Ok! So this woman in my area just discovered that her husband for years is a spirit!! They’ve got 3kids yo!!! Jesus Christ! She said she got pregnant for him while they were dating. Then they moved to my area.”

“Then they moved to my area. He bought a land and built a house. His neighbors said he doesn’t speak to anyone except his family. And he always walk alone.”

So now after 3kids, she started demanding aggressively to see his family. He said they were in the village that he will take her there. He then gave her lots of money to go to the market to buy things they would take home to his family”.

“He would always get in. And when she asks, he will say the door was not locked. She opened his wardrobe and it was filled with money. She took the money and left with the kids. And put the house up for sale”.

“Oh I guess I mistakenly deleted a tweet, were I tweeted that when she got back from the market, she met a note he wrote apologizing for his absence and his address in the village”.

Ok! So this woman in my area just discovered that her husband for years is a spirit!! They’ve got 3kids yo!!! Jesus Christ!