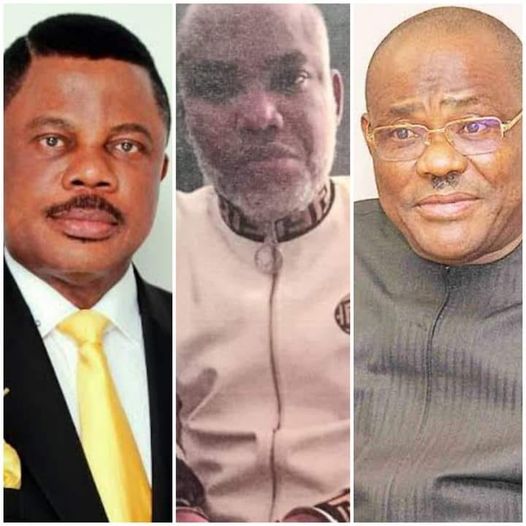 The Indigenous People of Biafra has stated that Governors Nyesom Wike and Willie Obiano of Rivers and Anambra states respectively allegedly bankrolled the abduction and repatriation of its leader, Nnamdi Kanu.

According to the statement made available by the IPOB spokesman, Emma Powerful, to newsmen on Thursday, the two governors willingly offered to aid the Nigerian government in capturing the Biafra secessionist leader, to protect their political interests.
The statement further revealed that the Minister of Labour and Employment, Dr Chris Ngige and an Igbo businessman Chief Emeka Offor also perfidiously played roles in Kanu’s current travails.

The statement reads in part, “The Indigenous People of Biafra (IPOB) ably led by our great and indomitable leader, Mazi Nnamdi Kanu, has finally uncovered those behind the betrayal of our leader Mazi Nnamdi Kanu to the evil hands of Fulani-controlled Government of Nigeria through the collaboration of the Kenyan Government and its secret services.
“Our crack intelligence unit has uncovered how the treacherous Governor Nyesom Wike of Rivers State; Governor Willie Obiano of Anambra State; greedy Igbo businessman, Chief Emeka Offor, Dr Chris Nwabueze Ngige conspired to sabotage our leader to safeguard their selfish political and business interests.

“Our intelligence unit, the M. Branch discovered how Emeka Offor of Oraifte coordinated and financed the evil plot. We equally gathered that the Nigerian Government initially refused to commit the extraordinary rendition until Emeka Offor, Nyesom Wike, and Willie Obiano, agreed to bankroll the plot.”

In the statement titled, ‘How Wike, Obiano, Emeka Offor Betrayed Our Leader – IPOB’, the group through its covert information revealed that the Nigerian government initially declined to fund the operation, but these Igbo personalities offered to carry the burden.
It also disclosed that Offor plotted to establish another Radio Biafra with N250million to work against the Nnamdi Kanu-led separatist agenda.
“According to our investigations, the Nigeria government refused to sponsor the project but these treacherous Igbo criminals volunteered to fund the evil mission. We also uncovered how Emeka Offor told some people that he was ready to provide N250 million to open another Radio Biafra to counter our Leader’s broadcasts on the official Radio Biafra.

“Should anything happen to our Leader Mazi Nnamdi Kanu, the fate of Judas will be more honourable than what will befall these traitors. Anybody close to these saboteurs should advise them to quickly go for the release of our Leader the way they trapped him into the net of the wicked Nigeria Government.

“We, therefore, want to place it on record that these traitors – Nyesom Wike, Willie Obiano, Emeka Offor, Dr Chris Nwabueze Ngige and their collaborators are to be held accountable to whatever happens to Nnamdi Kanu. They shall surely pay for their satanic role in the abduction and rendition of our Leader.