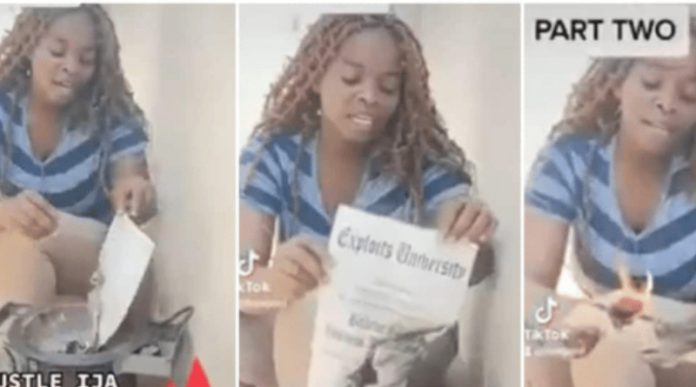 Bridget Thapwile Soko, a woman from Malawi who graduated with a degree in business administration four years ago, burned her diploma in front of the entire university.

The Woman claims that since she still doesn’t have a job after graduating from university four years ago, her diploma is now meaningless.

The young woman sang and made fun of everyone who declined to give her job offers or even invite her for interviews in a live TikTok video.

According to Bridget in the video, even her marriage certificate is more valuable than her degree, thus she sees no wrong in burning it.

Meanwhile, her school, Exploits University has revoked her certificate in a letter that has since gone viral on social media.

“We have learnt with disappointment that you recorded a video clip burning a degree that we awarded to you upon completion of your studies with Exploits University and posted on social media.

“It is our interpretation that you did this to disgrace and tarnish the image of the university. “The university is therefore revoking the degree of business administration awarded to you. Our decision will also be made public through the media.”

“Consequently, you are no longer a graduate of Exploits University and as such your degree certificate is invalidated with immediate effect.”