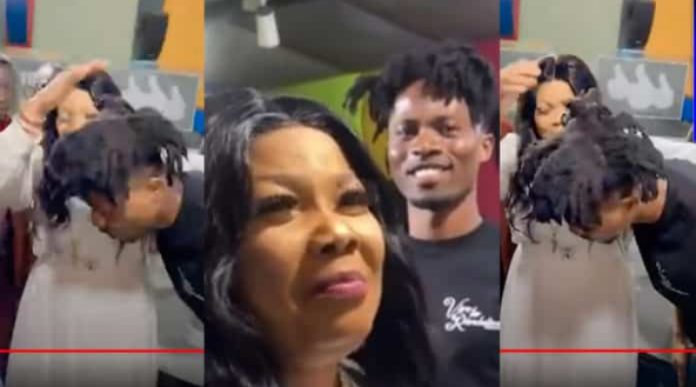 Nana Agradaa, a fetish priestess-turned- vangelist, has prayed for Kwesi Arthur by placing her hands on him.

Kwesi Arthur came at the studios of Okay FM to promote his new album “Son of Jacob,” and Nana Agradda used the chance to bless him.
Nana Agradaa is seen in the film placing her hands on Kwesi Arthur’s thickly dreadlocked hair and telling him that his life is blessed.
Following the prayer session, the two had a dialogue in which Kwesi Arthur told her about his new album.
When she heard the name “Son of Jacob”, Nana Agradda exclaimed, ” Oh, that’s a gospel album and it will definitely do well.”
Kwesi Arthur also convinced her about the fact that the ‘Son of Jacob” album has a track titled “Adom” which has some gospel feel about it which would definitely resonate with Nana Agradaa.