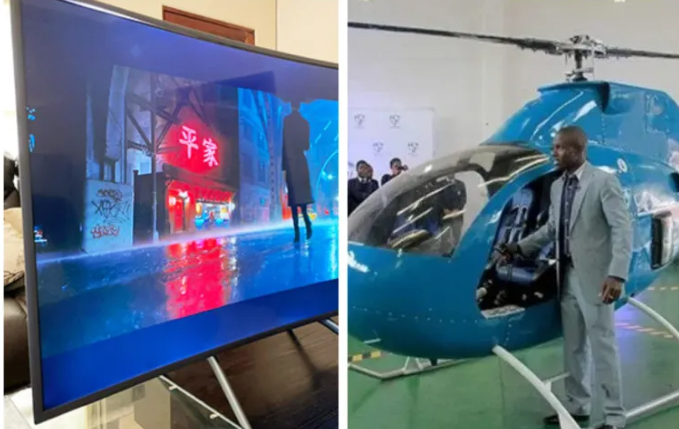 Zimbabwe, as an African country, has been trending in the media landscape including that of social media for the right reasons because a Zimbabwean national, has broken down beyond description, the barrier of hitches in technology which the world is being marvelled about because they thought such an innovation could not emerge from an African soil but the guy has amazing surprised all those who doubt if there would be anything good or significant coming from the land of African nationals.

It is undebatable that, technology has come to stay for real as the world continues to revolve around global transformation to making life more memorable and cheerful despite the challenges being borne at the economic fronts.

The good news this day of our time is that, an African descent has been recorded in the book of heroes, heroines, legends, experts, icons, divas, champions and history makers globally, for building a television set that does not need the connectivity of electrical power before it functions to the viewing pleasure of the audiences in the whole world.

The newest and celebrated innovator, Master Maxwell Chikumbutso, has been trending in the news both internationally and locally for manufacturing wireless television sets and other valuable cables that do not use an electricity before they function as he showcased such innovative technological dexterities at the shocking spectacle of the world as a whole.

His phenomenal technology which is a cordless television after she exhibited it joyfully, has stated that, the days of using huge colossal amount of scarce financial resources of buying electrical power or any other means before using your television to the tune of your viewing pleasure, is completely over and he is calling on those who are in the spirit of doing innovation and exploits, to join him in bidding a farewell to the aged long spectacle of using cables where lack of electrical connection was a severe austerities to the users, to endorse his newest version of technology because, his innovated and newly crafted gadgets work without any connection to the power grid.

What this means is that, you can use his innovative technological innovations without light because of their cordless nature which could be used by everyone at ease due to how his television sets power themselves without an electricity connection to the grind since they are all cable less and cordless in nature.

In other breath, those who do not have electricity can also use it at ease since it works without any electrical or solar power being connected with it which is bugging the brain of other world renowned individual members who had earlier innovated much touted gadgets as the world is using at this juncture and from the look of things, the youthful exuberant and innovative Zimbabwean national, has come to stay in the news for a very long time since this his particular dexterity, has outsmarted and overwhelmed those who think they are the only people with Godly wisdom in producing and manufacturing wireless appliances without the involvement of any African national but today in history, an African national has emerged triumphant and victorious in creating sterling and superb classical tools and gadgets that the world would cherish for ever since his innovative has become unprecedented in the history of this contemporary world.

Here we are, a brand new day has damned where people can enjoy watching proceedings on television sets most conveniently whilst they are completely off grid and by an extension, to say goodbye to electric wired homes and appliances. Master Maxwell Chikumbutso, is happily and joyfully entreating all and sundry to embrace the future with his newest version of the world’s first ever free energy powered television as the era of wireless powered gadgets is here, coming from a Zimbabwean national which the world could not hold their sights to behold with an awe.

Many people already started to celebrate the enterprising innovator as this kind of his level of an acumen, has defeated the logic and thoughts of those who arrogates themselves as the only technology wizards in the world but this simple Zimbabwean called Maxwell Chikumbutso, has defied all their assumptions and presumption against the African nationals as an erroneous impression which does not hold water.

How to Encrypt Files and Folder on Windows 10

What is the best way to work with data