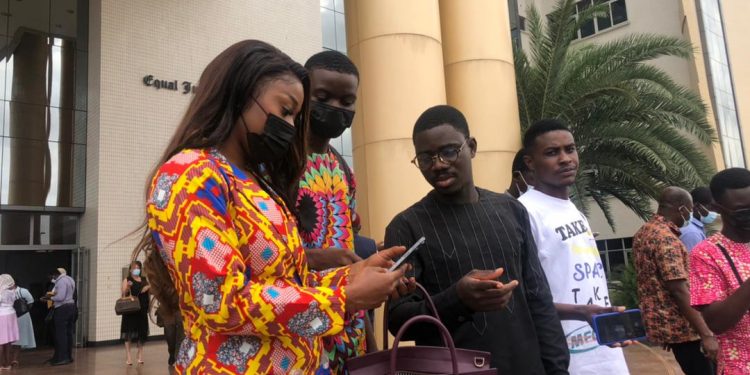 The Criminal Court 1 of the Accra High Court has adjourned the case between the #fixthecountry conveners and the state to Monday, June 21, 2021.

At the hearing on Monday, June 14, 2021, the State attorney prayed the High court to give them time to file their affidavit in opposition to the one filed by lawyers of the conveners.

The judge, Ruby Aryeetey, therefore granted the request and adjourned the case.

Speaking to the media after the hearing, one of the conveners of the #Fixthecountry campaign, Brownson Adatsi, said the delay in the proceedings will not deter them from registering their displeasure.

“Our lawyers did not file their motion earlier or did not give the motion to the republic; so what we are going to do is that, the case has been adjourned to Monday and we have to come back so we would have to meet with our people and then communicate to the larger group. This is a movement for the people so until we get in touch with the people we can’t tell you what we are going to do next; but we are still trying to mobilise people so anyone who feels they can help mobilise people in their district or towns can visit our social media pages and get in touch with us @GHfixthecountry.”

“We have always been saying that we live in a broken system and these processes are part of the broken system we are talking about. If we are saying we want the country to fix these problems; then we are not discouraged or disappointed. We know it is going to be a long journey, and we are ready for the journey ahead,” he added.

The police filed an ex-parte motion at the High Court against the planned protest and got a ruling in its favour on May 6, 2021.

The High Court ruled that the planned protest is prohibited until the restriction on public gatherings is lifted.

“It is hereby ordered that the organizers/conveners of FixTheCountry protest march, their associates, officers, agents, assigns, and workmen are prohibited from embarking on any demonstration on Sunday, 9th May 2021, or any other date until the restriction on public gatherings is lifted by the appropriate authority,” the order secured by the police stated.

Unhappy with the development, the group took the issue to the Supreme Court, where a five-member Supreme Court panel nullified the May 6, 2021 injunction order.

Arguing in court, Justice Srem Sai, the lawyer for the #FixTheCountry protesters, said the High Court order was absolute notwithstanding that ex-parte orders ordinarily lasted 10 days with room for the parties to then appear on notice.

He said the order was unambiguous and could not have been misunderstood by his clients, and prayed the court to set it aside.

On the other hand, Attorney General, Godfred Dame, argued that there was no subsisting order for the court to quash, and prayed the court to throw out the protesters.

The panel said the ex-parte injunction obtained under the hand of Justice Ruby Aryeetey of the High Court had since elapsed after the first 10 days of coming into force, as such, there was no subsisting injunction order stopping the #FixtheCountry protesters from going on a demonstration.

According to the AG, the IGP has, since the expiration of the ex-parte injunction, put the applicants on notice and the parties are currently before the High Court on notice.

Effectively, the Supreme Court quashed the indefinite order that stops the protesters from embarking on their street marches.