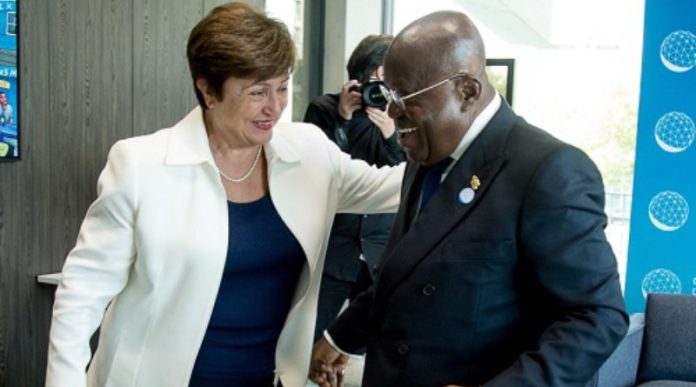 The International Monetary Fund (IMF) has revealed that some international creditors are being contacted about the possibility of canceling some of Ghana’s loans, according to Kristalina Georgieva, the IMF’s managing director.

She claims that the action is intended to erase debt for nations facing severe debt problems.

She mentioned Chad, Ethiopia, Zambia, Ghana, Lebanon, and Sri Lanka among the nations.

“It is very important for their people that we find the resolution to the debt problem, but the risk of contagion is not as high,” she said on American news channel CBS.

“If the debt list continues to grow, let us remember that 25% of emerging markets are tragically stressed territory” she warned, adding that global economic giants are themselves struggling due to COVID-19 and the Russia invasion of Ukraine.

Providing some details, she stated that the IMF is engaging both traditional and non-traditional creditors to find some space for poor countries in debt distress positions to bring some relief.

She pointed out that 2023 is going to be a tough year for China, a major non-traditional creditor.

This, she said could further affect developing countries with high debt level since China will not be able to provide cheaper funds.

The Internal Monetary Fund (IMF) in November, 2022 confirmed that government of Ghana has declared its intention to conduct a debt operation ( also called debt restructuring) in 2023.

According to an update on the fund’s website, “authorities [Ghana] have assessed their public debt as being unsustainable over the medium term. Together with efforts to bring the government deficit down, they have announced their intention to conduct a debt operation to ensure debt sustainability.”

The Bretton Woods Institution has welcomed government’s decision to tread the path of debt operation.

“We welcome the authorities’ intentions to implement policies that will ensure the sustainability of public finances” the Fund stressed.

The IMF, however, indicated that the “nature of engagements and debt operations between Ghana and its creditors are sovereign decisions.”