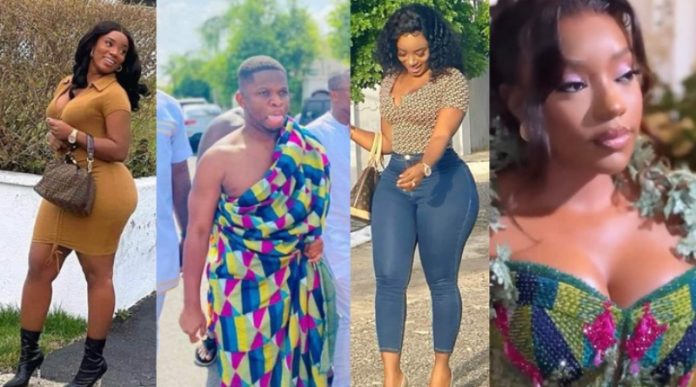 Irene Gyamfi, the curvy wife of Sammy Gyamfi, the spokesperson for the National Democratic Congress (NDC), has recently come to public attention. In a private, traditional wedding ceremony, the couple exchanged vows in the presence of dignitaries like former president John Mahama and other NDC leaders.

Irene is unknown to most people, yet she is a devoted supporter of the NDC and has held positions of responsibility inside the organization. Nevertheless, it is obvious that she is a pretty woman with an alluring radiant figure, great curves, and a desirable physique. Because of the similarities in their physical characteristics, some have even compared her to NDC journalist Serwaa Amihere.

Irene has kept a quiet profile despite the fact that she is well known because of her marriage to Sammy Gyamfi. The reason the pair waited a while to be married and keep their romance a secret is unknown. It is unknown if Irene had any influence on Sammy Gyamfi’s choice to leave his baby mother for her. Sammy Gyamfi also has a son from a prior relationship.

Regardless of the circumstances surrounding their relationship, it is clear that Irene and Sammy Gyamfi are happily married and enjoying their new life together. Here’s hoping they have a long and happy marriage