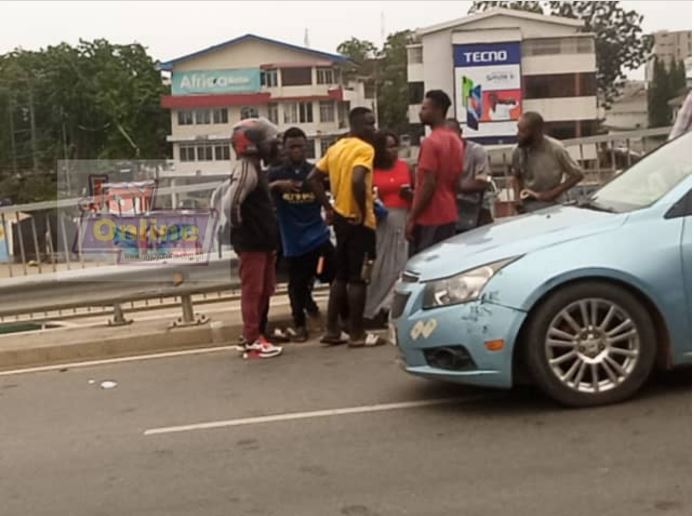 A bizarre incident involving a mentally deranged woman and an unknown man where the woman inadvertently or premeditatedly, killed the man with heavy stones at the Kwame Nkrumah Circle Interchange leading to his untimely death.

The incident involving the earlier indicated two individuals, could not easily be resolved by the police officers mounting patrol checks at the area to forestall any possible bloodshed between rival residents putting up on the pavements of the interchange as such sites have become their next place of an abode.

The unfortunate event was reported to have unfolded yesterday in the after where suddenly, the alleged lunatic, clandestinely, hurled harmful objects including hefty stones against the departed man who passed on due to the severity of the harm and injuries caused to him by the said the mentally frail woman at the Kwame Nkrumah Circle Interchange heralding the shocking demise of the yet to be identified individual who suddenly kicked the bucket shockingly in the presence of a replete number of people who thronged to the incident scene to catch a glimpse of the fracas which in turn, ghastly, resulted in the final breathe of the deceased individual who bade farewell to all and sundry present at the incident scene.

It is not quite comprehensive as to why the number of police and military forces patrolling the entire circle enclaves, could not avert such an insightful act from happening because, their visibility is always felt and seen on the ground due to how they regularly conduct their checks as usual but this very unfolded incident, took over their thinking faculties without further explanation.

The issues surrounding the presence of mad people taking over many parts of the circle enclaves and other principal streets most especially, in the national capital, have reached an alarming rate to the extent that, if authorities are responsible for the safe upkeep of such environment hazard persons are not up and doing, much of such incidents will continue to happen in broad daylight because the number of those people on the roads are overwhelming and they usually pose as a threat and danger to commuters plying trading trade activities in the national capital and other parts of Ghana.

It is a mandate of the social welfare department to do something reasonable in eradicating such menace to society but nothing significant is being seen from their outfit if indeed they are committed to embarking on and undertaking their legally institutionalized duties in the country to helping and sorting out the needs and challenges of those individuals who are endangering the lives and security of people who pass by and by an extension, ply and undertake trading activities in those centers to make ends meet.

When it happens tragically as this, lukewarm leaders are quick and fast to extend their condolences to the bereaved families of those who witness such unexpected events but the fact of the matter remains undisputed that, those knee-jerk attitudes, do not restore and revive the loss of anyone’s life to its natural state.