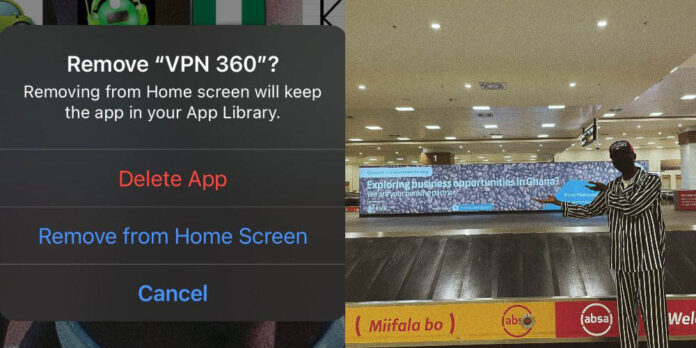 A Nigerian man has deleted his VPN app after touching down at the Kotoka International Airport.

Emeka The Stallion bid his country goodbye amid the recent ban on Twitter in Nigeria. Emeka like other Nigerians has since resorted to using Virtual Private Network apps to obscure their location to be able to use the bird app.

He wrote in a tweet: “that’s it. BYE BYE NIGERIA” accompanied by three photos of himself carrying his luggage and a screenshot while deleting VPN 360.

Why did Nigeria ban Twitter?
In a tweet on Tuesday, President Muhammadu threatened to deal with those in the country’s southeast, whom he blames for the region’s recurrent attacks on public infrastructure.

“Many of those misbehaving today are too young to be aware of the destruction and loss of lives that occurred during the Nigerian Civil War. Those of us in the fields for 30 months, who went through the war, will treat them in the language they understand.”

Nigerians may be prosecuted for using Twitter after the ban
In a statement, Justice Minister Abubakar Malami said he had “directed for the immediate prosecution of offenders of the Federal Government ban on Twitter operations in Nigeria”, telling the public prosecutor to “swing into action”.

The message was targeted at both corporations and individuals, the minister’s spokesperson Umar Gwandu told the BBC.