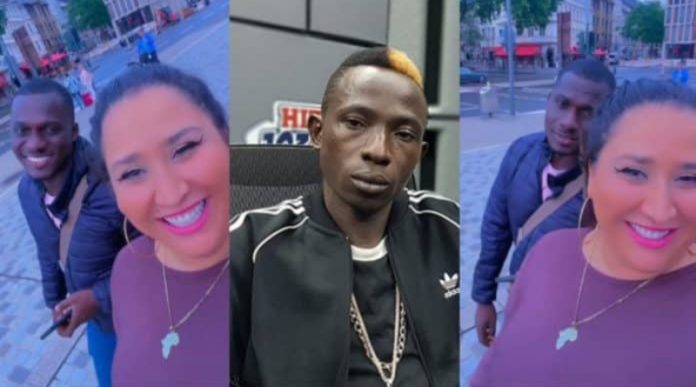 Patapaa Amisty has fallen on Zionfelix once more, accusing him of attempting to kidnap his German wife.

Patapaa has been buzzing on the internet for a few days now, ever since word broke that he had divorced his German wife.

During an interview with Cape-Coast radio station Kastle FM, the musician debunked rumors that he and his wife are no longer together, forcefully stating that they are still a pair.

Zionfelix’s name popped up in the divorce saga after he went to interview Liha Miller in Germany on his uncut show.

Patapaa took offence in what Zionfelix did by insisting that he should have first consulted him before interviewing his wife.

According to Patapaa in an interview with Sammy Kay, Zionfelix wanted to snatch his wife from him after he learnt that they had problems.

Meanwhile, this same Patapaa has accused Zionfelix of causing havoc in his marriage and additionally warned Ghanaians to be very wary of him.

Patapaa is a very confused and two-faced person because his allegations against Zionfelix are empty.

I’m convinced that he’s doing all these dirty gimmicks to gain relevance once again because we all know that his fame has dwindled.