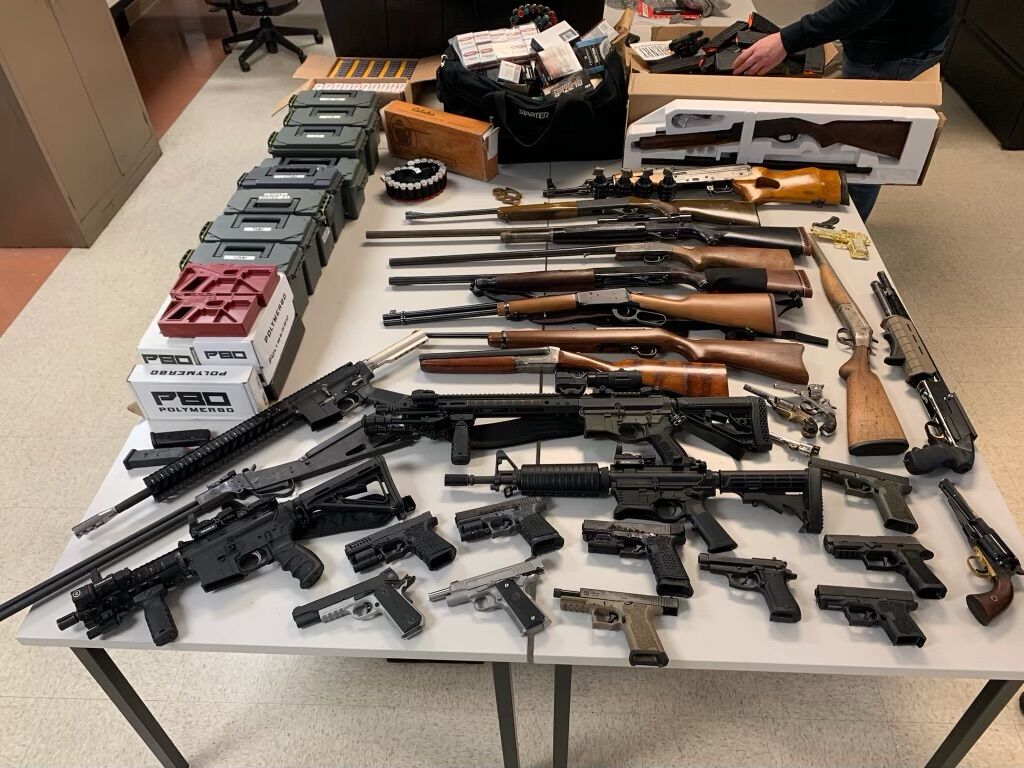 Police at Adeiso in the Eastern Region have intercepted four pump action guns and 75 live cartridges from a vehicle allegedly belonging to a sand-winning company.

Information gathered indicated that on June 21, 2021, at about 3:00 am, the Adeiso Police Command gathered intelligence that there was illegal sand winning ongoing at Okaikrom community near Adeiso.

Police dispatched a team to the area and met some tipper trucks and two payloaders winning sand.

The tipper truck drivers and the payloader operators sped off on seeing the Police but the Police managed to arrest suspect Klutse Kofi who was in charge of Mitsubishi Pickup with registration number GE 7191-19.

A search conducted in the Pickup led to the retrieval of four Pump Action guns with 78 live cartridges.

The Public Relations Officer of the Eastern Regional Police Command confirmed the arrest to Starr News.

He said the suspect told Police that the weapons belonged to Sammertide Construction and Sand Winning Company.

He said the suspect has been detained with the four Pump Action guns retained at the Station.
This is happening on the back of an attack on the mining site by some armed men.

On June 15, 2021, at about 2:00 pm, the first complainant, Osae Kwame, was returning from his farm to Adeiso town to buy food for his farm labourers.

But he met the accused persons who were in a convoy of three pick-up vehicles and a Jeep vehicle with registration number GS 9835-19. They stopped by him, handcuffed and abducted him into one of the Pick-Up vehicles and drove him to Tank Akuraa, a farming community near Adeiso.

Police upon receipt of distress calls about the incident rushed to the village and rescued him but the accused persons sped off from the scene and invaded the Summertide Company sand-winning site at Obeng Yaw village also near Adeiso amidst sporadic firing of gunshots.

The second complainant, Alhassan Zakari, was shot in the left leg during the indiscriminate firing of gunshots.

They violently arrested five persons at the site, whisked them into their vehicles, and drove away to an unknown location.

The owner of the site alleged he later detected that the accused persons stole Ghc96,000 at the site during the gun violence.

The five persons arrested by the accused persons were later rescued by Kyebi Police after the wireless message was activated by police.

At about 4:20 pm, the accused persons were arrested by the Adeiso Police.

A search conducted in a Jeep vehicle belonging to Nana Barfuor Sarpong, who claimed to be National Security Operative, detected one Ak47 assault rifle, one pistol, and three spent shells which were retrieved by the Police.

The victims -Alhassan Zakaria and Bright Apama, who sustained gunshot wounds on their legs, were receiving treatment at the Eastern Regional Hospital in Koforidua.

Meanwhile, the Eastern Regional CID has taken over the case.

The Koforidua Circuit Court admitted the five accused persons including Akyem Abuakwa chief who claim to be a National Security Operative to bail in the sum of 200,000 cedis with two sureties.

The rest are Jonathan Martey ,Eric Yaw Obeng ,Victor Ahenkora Koranteng and others at large .

The Prosecuting Officer Cyril Boateng Keteku, Assistant State Attorney explained to the court that the first complainant in the case, Osae Kwame, 59, is a farmer while the second complainant Alhassan Zakari, 39, is also a farmer.

He said the accused persons are Nana Baffuor Sarpong who claimed to be National Security Personnel attached to Forestry Commission as training Coordinator and timber monitoring officer.

The other accused persons are at large.