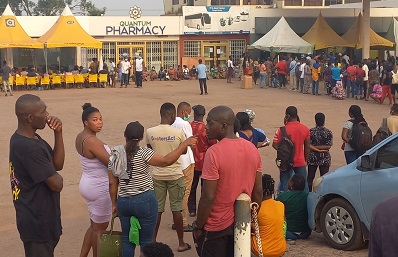 As the National Communications Authority continues to unleash its wrath on cracking and blocking SIM cards that have not been registered yet after giving out an ultimatum, many registration centres of telecommunication companies, have been flooded with long standing queues as registrants are overwhelmed with protracted issues surrounding their easy access to registration.

Many Sim card holders indicated that, they registered over two years ago with matters relating to Ghana card acquisition but the authorities at the offices of National Identification Authority, diabolically, gave them balderdash and flimsy excuses and reasons that, they could not have time to validate their cards but suddenly according to the registrants, they registered before others but they were able to secure theirs because, they were able to pay what such irresponsible officials demanded from them as a way of greasing their palms.

Challenging are being faced in registration centres across the country as those awaiting their turn to register their sim cards, are inundated with severe fury and anger.

It has become clear to the owners of unregistered SIM cards that, as the Ministry of Communication issued its readiness to block and disconnect such unregistered cars, it goes ahead to implement the latter threat by blocking their sim cards, barring them from using the cards for the ongoing calls.

Due to the hitches being faced now by those large number of people, they have therefore called on the government, to be lenient on people who are struggling to register for their Ghana cards since it is the only means by which the sim cards could be registered.