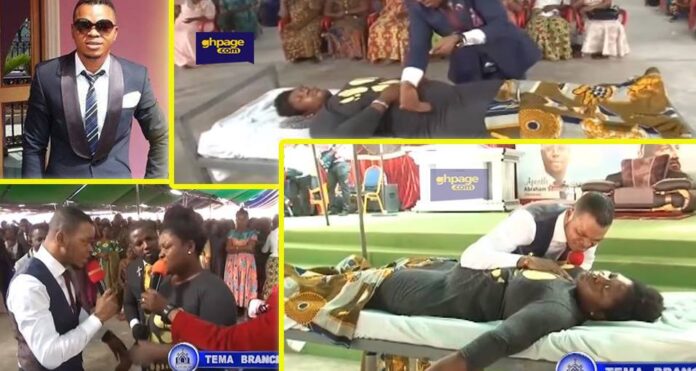 Bishop Daniel Obinim, who is touted to have been endowed with exclusive angelic gifting, has once again, shockingly turned his entire body as a resemblance of the Messiah during a live church service in the full glare of the enthusiastic congregation.

Bishop Obinim, a man who claims to be an anointed vessel of God, the Most High, has been doing exceptional miracles in his church on regular basis as some people doubt of the powers being vested in his authority for such exploits he has been exhibiting.

While people are doubtful of his spiritual powers, the said man of God could easily change his whole body into something else unthinkable and then return to his normal state within a twinkle of an eye while his church members look on with an awe.

The trending news online at this present juncture is that, this time around, he craftily configured himself to someone who looks as though he were Jesus Christ himself and by an extension, doing miracles and wonderful deliverance services for members live for everybody to testify so that, those who are doubting of his spiritual powers will know that, he has actually been called into full time ministerial work because, the hand of God is the one resting upon his life.

Some people especially, those at the religious organisations, have been in a total doubt and apprehension of Obinim and his church activities because, they do not really believe that, it is the spirit of God he has been using to do his miracle service in his church and elsewhere provided the argument that, God himself does not do his activities in such a manner as being done by Bishop Daniel Obinim hence their decision to reject and distance themselves from his religious related activities in his church.