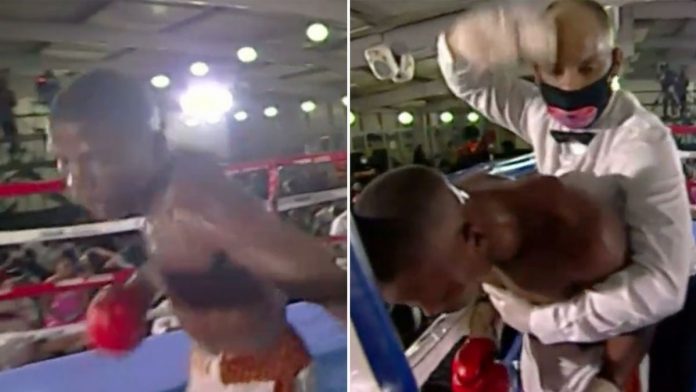 The unusual case of seeing things in the spiritual realm, is not the prelude of many people because they do not believe in such spectacles simply on the ground that they are carnally minded and earthly without any bit of religious and spiritual inclinations.

But someone who had the sight of seeing the invisible from the visible sight of every physical being, kicked the bucket after having a bizarre encounter with thought to be one of his boxing maestros in South Africa which has caused many other people dumbfounded.

A very well known and an illustrious boxing legend in South Africa had died after fight with an invisible boxer in a viral video who was presumed to be an incubus.

The boxing icon, Simiso Buthelezi, had given up his ghost after he fiercely fought and battled with someone believed to be a spirit in a boxing ring encounter.

Simiso Buthelezi, was seen and watched by millions of boxing enthusiasts who are following his boxing career with much fascinations, fighting with someone in a well decorated and organised boxing ring, which they even thought he was out of the country on a boxing assignment.

In the viral video where the boxing hero was seen fighting with someone in the boxing ring, it is quite clear that someone else is in the ring with him as they engaged each other in a boxing bout during blow to blow encounter with each other for a perceived fiercely contested boxing title.

Simiso Buthelezi was watched severally punching his boxing rival without having mercy on him as his upper cuts and jabs overwhelmed his opponent but not knowing, he was rather fighting and combating with an invisible force in a totally different realm beyond the comprehension of physical senses.

After aggressively fighting with an evil force an unclaimed boxing title, he suddenly passed away without giving anyone else a word as to what actually transpired between him and the other invisible boxing opponent he fought with without knowing if indeed he won the boxing title or not.

But some people who are observing the whole scenes from a different perspective, are attributing such weird spectacles to things that manifest in the spiritual realm beyond the thoughts and comprehension of the physical man.

He body has been deposited at the morgue awaiting an autopsy to unravel the true cause of his strange death.

Jubilation continuous as Kotoko players smile to the bank