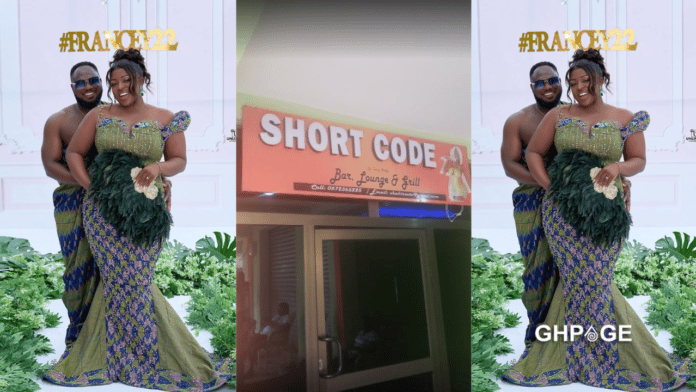 It has been rumored that, Tracey Boakye, has secretly sold her restaurant so that she could use the proceeds from the sales of the said restaurant to pave way for her talk about the wedding which went viral long ago before the issue of her selling the property even came into the public domain.

Some individuals online are buzzing the nets with the gossip that Tracey Boakye got tototallyroke down to the extent of selling her belonging before she could finally tie the knot with their long-standing friend.

As some people are struggling to come to terms with the exact crime Tracey Boakye has committed after selling her property to happily see her real wedding come through successfully, after someone claiming to be the caretaker of the facility exposed her to the public about what she did behind the scenes before some people are celebrating her.

Even though many people have not seen anything wrong with a woman selling off her belonging so that she could help her beloved partner tie the knot with her elegantly, it is not every woman in Ghana could do such a thing but expect only a few ladies including Tracey Boakye. Social media has become a center of public attention now the moment anyone called a celebrity does anything laudable, then, instead of the public celebrating such amazing spectacular stuff from anybody of that excellent and audacious stance, they try to act as if the other person does not know anything about his or her limitations.

Even the so-called caretaker who claimed that Tracey Boakye has sold her private restaurant to finance her wedding activities, what sort of property has she acquired before claiming to expose some other individuals who have done something meaningful in life and by that means, you have been employed at the benevolent of such a woman who has touched your life by providing you with a job.

But, Tracey Boakye herself, has not confirmed yet if indeed it was the proceeds from the sales of her private restaurant that she used to see her long-awaited wedding come through successfully or not but which way ever it goes, she owes me nobody an apology for selling off her private business entity which hitherto, does not fetch her many profits nowadays as compared with previous profit margins and gains; according to a certain reliable source.