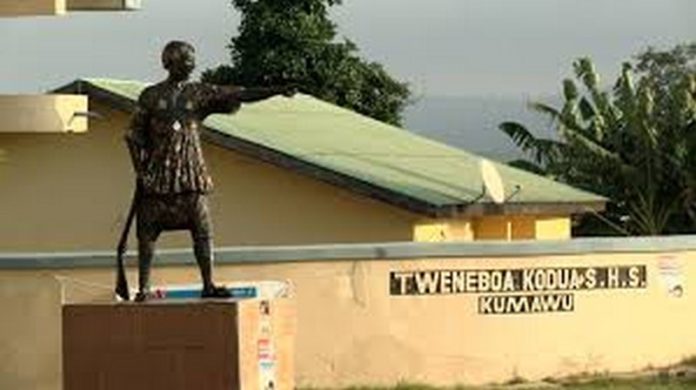 The authorities of the Tweneboa Kodua Senior High School where one of their students had been murdered under bizarre circumstances which left people dumbfounded in the entire circles of the school have indicated that the said ststudentho was slain for mysterious reasons, left the premises of the school without seeking for an exeat.

One of the students was killed by certain unknown assailants who disguised themselves as neighbors the vicinity lured the victim into a tight corner and unleased multiple counts of somersaults and attacks on the body parts of the person which led the student to bleed profusely arising out of the death of the said student whose identity has been withheld for security reasons.

According to the school authorities in the school, students nowadays think they have grown enough to be left to do their things while they are under the leadership of the school but some people are asking how come the student left the gate of the school without the security forces mounting surveillance at the main entrance of the school did not get to know the outing of the said student who suddenly lost breathe due to the negligence of some individuals whose duties are to maintain and safeguard the lives of students when they come to school.

Tweneboa Kodua senior high school is located in the Ashanti regional town where criminal activities are fast rising in the community despite the presence of the Ghana Police Service officers patrolling the township to forestall any unforeseen happenings that may endanger the lives of the community dwellers.

The incident unfolded out of the jurisdiction of the school authorities at an undisclosed time frame after they learned of the lifeless body of the students who they suspected to have been killed for ritual purposes because it has become the order of the day for those who want to be rich quick but they do not want to sweat before getting the wealth that they desire.

The Ghana Police Service had recently been cited for not doing anything profitable to maintain peace and lasting security in the country rather, its officers are quick to extort money from those who come to their offices to lodge complaints about those that they are suspecting to be on the heels of their lives during the Global Info Analytics polls through which that sad drowning defamatory expose was revealed causing the institution to be identified and labeled as the second most corrupt and unreliable public institution in Ghana.

The damning expose which implicated the integrity of the police service as a whole, has demoralized the officers from giving up their best because their images had been eroded after such a revealing episode coming from the findings of the Global Info Analytics survey conducted by its trusted officers assigned to undertake the research work which some people in the current administration thought to be a sponsored politically motivated agenda engineered hook line and sinker by the main opposition political party the National Democratic Congress to win a cheap political point after losing the firm grip of power.

But our parents should also try and do something reasonable by way of counseling their teenagers on matters of personal security our school authorities will also have a throat to drink water into for them to formulate good and sound policies that will, in the long run, transform the lives of such students placed under their leadership.