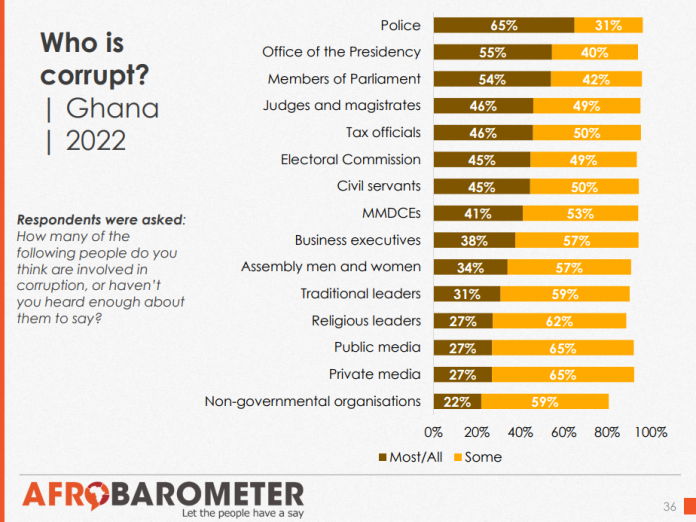 The report filed by an independent, credible, reliable, trusted, a fair, transparent, and fearless private firm, Afrobarometer, has revealed a harrowing spectacle of massive loot and shared criminal syndicate members calling themselves public servants in Ghana who are in turning, wrecking and siphoning the nation with several millions of dollars on daily basis for their parochial interest without thinking twice about the financial repercussions incurred for the country due to their illicit and clandestine pilfering activities they are secreting undertaking in the country.

Afrobarometer survey has indicted the presidency of the republic of Ghana under the leadership of His Excellency Nana Addo Dankwa Akufo Addo describing his office, as being the second most corrupt public institution in the nation of Ghana were, the police administration which is the law enforcement agency established by the constitution of Ghana, came tops at being the most corrupt and endemic corrupt institution in the country Ghana.

As the police administration is ranked the highest most corrupt public institution in the state, people who have been frustrated by the same police officers to either induce their minds with money before certain activities or investigations could be carried out into their reported cases, corroborated and attested to the unsubstantiated assumption as been public opinion polls conducted by the Afrobarometer survey group.

Some prominent government officials have already joined hands to condemn the polls published by the Afrobarometer survey group which seeks to express the views of the voiceless Ghanaian people who have a lot of say about the current happenings ongoing in the country but due to the circumstances under which they find themselves, they do not have how they can express their thoughts for the governing authorities to hear their worries and challenges that they are enduring in their lives.

According to many government officials under this present regime, they believe and hold the view that it is the main opposition political party, the National Democratic Congress, NDC, that has secretly sponsored the survey to be conducted to paint the government bad in the eyes of Ghanaian youth even though the government is doing exactly what it can within the framework of its powers stipulated by law.

To such people, it is not the reality that, the government of Ghana under the auspices of Nana Addo Dankwa Akufo Addo, is the second most corrupt public institution in the country rather, it is a report filed by the imaginations of those who are feeling disgruntled and grieved just because, they have completely lost a firm grip of touch with the running of the country’s resources hence their decision to embark on such dangerous and malicious tangent.

But people who are monitoring things closely from afar, are also endorsing the polls obtained by the Afrobarometer Survey Group describing them as factual and accurate because they believe that, that is the reality on the ground and not vice versa and some are bent on doing though the sheets are very clean and obvious for someone in class one to even conclude that, the survey conducted by the Afrobarometer, has hit the nail right on the head without any shred of doubts.

The National Democratic Congress, NDC, has not officially responded to allegations churned out against its offices that, it sponsored the survey embarked upon by the Afrobarometer to win a cheap political point which is far from telling the truth and nothing else but the truth for all to feel and see in their real experiences.