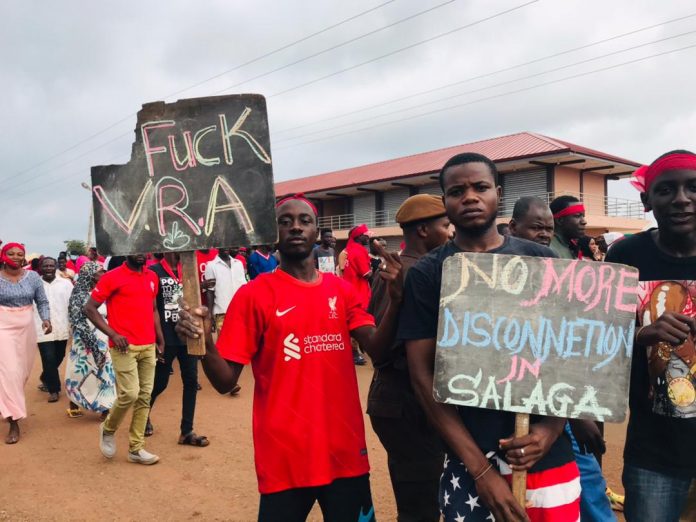 Angry residents of Salaga in the Gonja Municipality of the Savannah Region, have taken to the streets in their quest to register their displeasure about the erratic power challenges faced by the community members in the area.

Over a whopping number of people who have been greatly affected, thronged onto the streets without listening to any pleas or persuasion from anybody who attempts to calm them down for the authorities in the area to deal with the matter amicably but they defied every order given them by the community leaders because to some of them, it could mean they are trying to disgrace and embarrass those who are supposed to supply adequate power to the community dwellers.

The demonstrators cladded in red attires and red armbands, which some few of the inscriptions against the unreliable services being rendered by the power suppliers in that hinter part of the country. In many parts of the regions up north, the Electricity Company of Ghana does not necessarily provide or distribute power to the communities but NEDCO does.

The NEDCO is the Northern Electricity Development Company which is a regulated mandated body or an institution that supplies power to the homes and companies in that sector of Ghana without the involvement of the Electricity Company of Ghana which supplies to all the southern sectors of Ghana where Volta River Authority is the power producer or generator and GRIDCO transmits the energy produced by the Volta River Authority before ECG distributes or supplies to the homes of those at the southern sector zones.

The Salaga township is a typical farming community where the residents are visibly plying their traditional farming activities from which they could provide ends meet for their families and loved ones because they are breadwinners to a lot of people who are largely depending on them for survival.

The angry residents have at this point, hit the road with full vim that they must drive their grievances onto the doorsteps of those who are expected to undertake their duties diligently but they are shrieking their lawful duties.

It is not however clear if indeed, permissions were sought from the security forces in the region whose duties are to maintain law and order in the country because the number of people who participated in the protest was unprecedented.

No official communication has been disseminated to the residents about how the challenges they are experiencing currently about their erratic problems would be resolved and sorted out even though, according to the demonstrators, they are sick and tired of the flimsy excuses provided by their power suppliers in those remote parts of the country, Ghana.