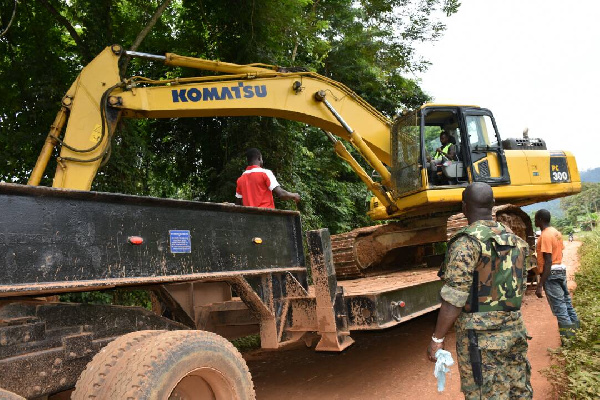 The District Chief Executive officer at the centre of the alleged missing but found illegal gold mining excavators, has demanded from the police administration in the district, to as a matter of an urgency, swiftly commence investigations into who exactly owns such luxurious earth moving equipments in the area.

According to the District Chief Executive Officer, who doubles as the district security council boss, Kwasi Bonzo, his quest to unravel the original owners who own those machines being used to degrade the lands in the community, will put to rest completely, the mystery surrounding who actually is being claimed to have procured such expensive equipments because, others are even suspecting him to be the brain behind the operations and mining activities for gold in the district.

He therefore stated that, for his reputation not to be jeopardised, he must clear and exonerate himself from every form of galamsey operations and mining related activities as certain unsubstantiated allegations are being levelled against his august office that he is also having secret dealings with those embarking on that nation wrecking adventure.

In view of that, he has therefore appealed to the police administration in the area, to conduct an impartial, fair and transparent investigations into the real owners of those excavators being used for their operations and mining activities and bring out the names of such individuals into the public domain because, he wants his entire hands to be exonerated from such heinous activities in the district, which is the head.

The District Chief Executive, Kwasi Bonzo, was arrested on the day when police officers working day and night at the Ellembele district around the illegal mining sites as he was reported to have heckled and hindered easy detention and arrest of those individual members who were thought to have stolen the machines after learning of the police officers search for those excavators but, he was later released from police custody as further investigations are still ongoing.
Source: www.ghbuzznews.com