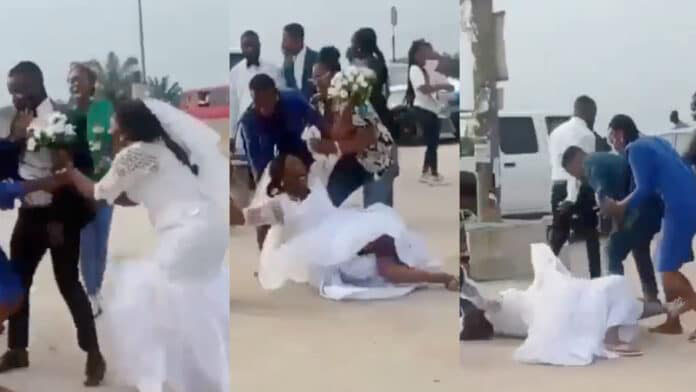 On the day of their wedding, a Ghanaian guy abandoned his fiancée for an unspecified reason.

This came after the bride was publicly spotted crying and pushing herself all over the angered groom.

An account of a stolid gentleman who had given up on his plan to make the woman his wife may be seen in a film.

The upset woman who paced back and forth, threw herself to the ground, and made a disturbance could not be comforted in any way.

The groom’s best men walked him away from the scene with him clearly in support. The bride, who had mud spattered all over her, was left in her gown.

According to insider information, the groom learnt regrettably the day before their wedding that his fiancée had been having relations with her ex-boyfriend.

One of his close friends, who had already learnt about the woman’s escape, told him on the day of their wedding.

Evidently unable to hold back the message, the man answered right away. He immediately decided to call off the wedding and annul the marriage.