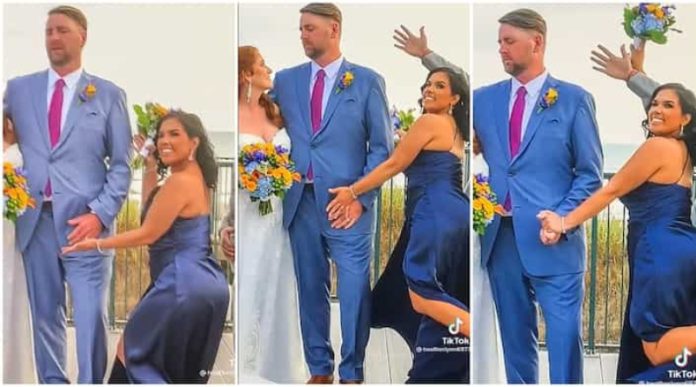 A bridesmaid touched the husband inappropriately in videos and photos from a wedding photo shoot, which have gone viral on social media and drawn a variety of comments.

Although it’s unclear if the bridesmaid was intoxicated or was just acting sexy, netizens on numerous social media sites have harshly criticized her actions.

The stunning bridesmaid’s hand was securely wrapped around the groom’s man area in a few of the pictures.

The bridesmaid was reportedly touchy throughout the photo shoot because she had plans to steal the groom from the bride in the future, according to the majority of comments under the video and photos.

Others have speculated that the groom and his wife may be having an affair because the bridesmaid was able to touch the groom’s most valuable possessions while they were being photographed in front of a large crowd.

This particular narrative raises questions because there are so many tales of bridesmaids subsequently stealing the husband from the bride that we have read and seen.