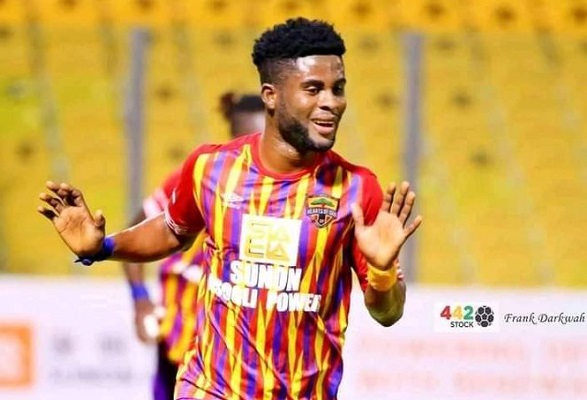 According to some reports tricking in, we have gathered that Accra Hearts Of Oak forward Daniel Afriyie,

has rejected contract extension agreement talks with him by the management of the club on a whopping quantum of Ghc 12,000 with the club after further engagement with him and his manager where everything ended inconclusively as the player refuted any possibility of remaining in the club for the next season games as his current contract elapses within the next two months standing.

The club is reported to be doing everything possible to keep the player from moving away because the information communicated to certain management members of the club is that, he is presently foreseeing some chances of joining one of the emerging clubs in Norway.

The club is therefore preparing to increase the amount to the colossal amount of Ghc 15,000 significantly to see if he could reverse his decision.

Daniel Afriyie, whose contract with the club expires in the next couple of months, is rumoured to be joining the Norwegian side Viking FK football team ignoring the pleas of the management of Accra Hearts Of Oak to stay with them for a little while before he finally switches to the Norwegian side but it is proving grounds tough for the management to easily reach an extension agreement with him because he has taken an entrenched stance on his decision despite being persuaded upon pleadings upon pleadings but everything is proving futile without any meaningful progress in deliberations with his outfit.

The player who always gives tremendous supports to his colleague footballers on the field of play, is seriously bent on joining the Norwegian football club Viking FK hence his unwilling to yield to any conversation being reached out to him and his personal manager when it comes to football matters and that is the topmost reason why he is actually eyeing that Norwegian football team out of the country so that he could probably receive much attentions to justify his inclusion and signing into the club where he would prove to all and sundry that he has come into the club to demonstrate his unflinching support to the club and not because of what has been offered to him before he agrees on that solid ground to join the club.