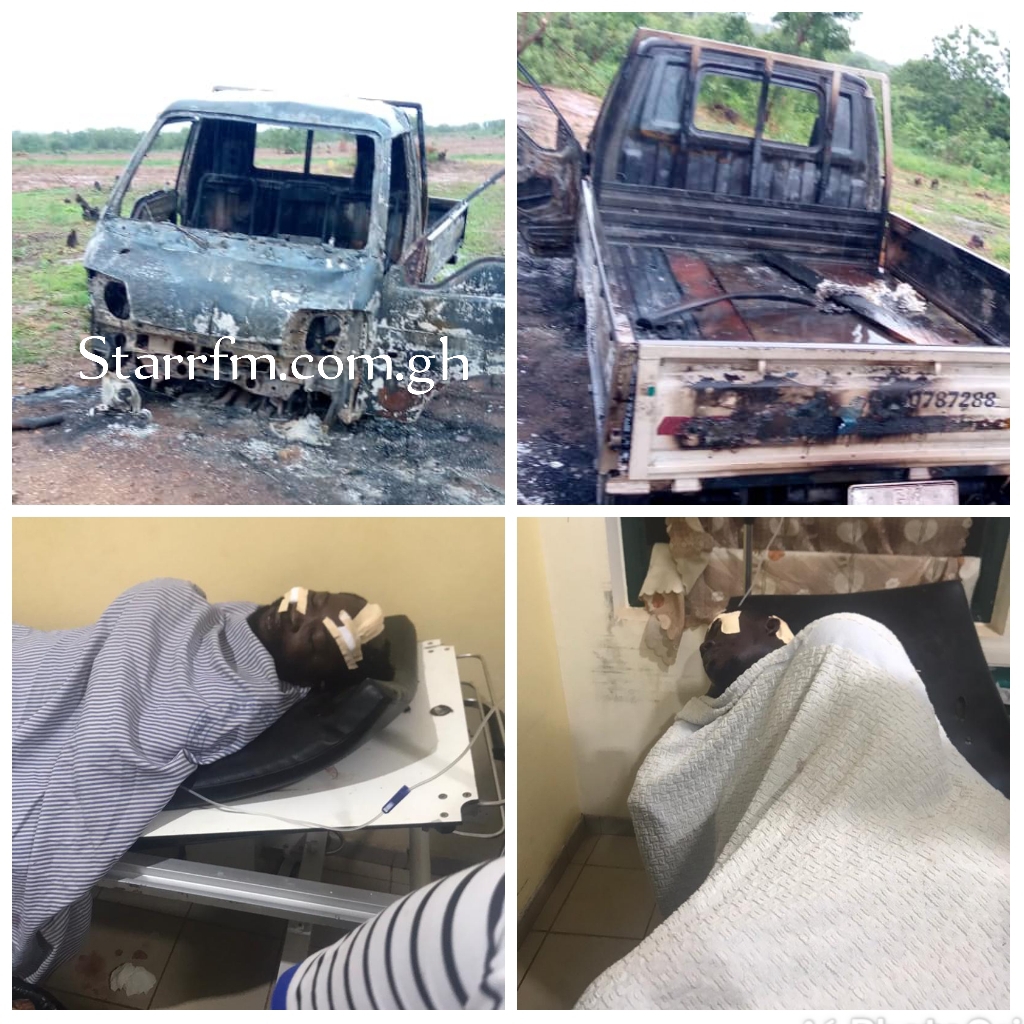 At least four persons have been butchered at the Dedeso resettlement community near Begoro in Fanteakwa North District in the Eastern region during violent clashes between residents and some armed thugs who invaded the community.

Starr News has gathered that Osabarima Ayirepe II, acting Chief of Begoro stormed the Dedeso community Saturday, June 27, 2021, with 20 thugs on board a Kia Bongo truck with registration number GW 551-21 and a motorbike with one-armed police escort.

The Chief and his men together with the police officer went to a disputed land at Pertiefoo near Dedeso.

The thugs allegedly started assaulting some farmers on the land which triggered a violent defence by the community members leading to a bloody clash. The Vehicle was set on fire.

The reinforcement team from the Begoro District Police command quickly proceeded to the scene to restore calm.

Some members of the thugs and the community sustained machete wounds.

Two of them found by Police lying motionless at the roadside in a pool of blood were rushed to Begoro Government Hospital for treatment.

A search is ongoing for a resident who sustained severe injury.

Assembly Member for Dedeso, Randolph Nii Tetteh told Starr News, tension is still high in the community after information reached them that, the chief has remobilized armed thugs to relaunch an attack on the community.

Meanwhile, the Public Relations Officer of the Eastern Regional Police Command, DSP Ebenezer Tetteh, says calm has been restored but the police are still on the ground for sustainable peace.

Residents of Dedeso -Wirako Resettlement Community have been agitating over an attempt by the Begoro Traditional Council to dispossess them of the state acquired land on which they live and farm for livelihood.

The construction of Akosombo Hydroelectric Dam in 1961 inevitably created the Volta Lake which displaced 730 villages with a total population of 80,000 people.

These displaced people were relocated and resettled by the state in fifty-two (52) townships spread over four (4) regions of the country; namely Volta, Oti, Eastern, Bono East, Northern and Savannah Regions and covering seventeen (20) districts of the country.

However, after over 50 years of resettlement, chiefs and elders of Dedeso Wirako Resettlement community say, their 8,700.24Km land acquired by the government of Ghana in 1969 by Executive Instrument (EI.54) for the resettled families for agricultural purposes are being taken away from them by the Akyem Abuakwa Traditional Council.

The agitating residents say the Chief Osabarima Bosompem Ayirepe II claim the lands belong to Akyem Abuakwa since Osagyefuo Dr Kwame Nkrumah did not pay compensation for the lands acquired.

Addressing the media in the community, a few months ago convener Michael Teye Sackitey said, the community will rise against the Chief and his armed land guards terrorizing and dispossessing them of their farmlands if the security and stakeholders fail to stop them.

“He fearlessly repeated the same act of unlawful shootings on 14th June 2020. On 17th June 2020 at about 5; 00 pm, he ordered nine land guards,well-armed led by his son, one William to Petefuor and Agavedzi communities to chase out farmers with gunshots. On April 4,2020 ,the said chief stormed the community again with his armed thugs to assault one Samuel Batsa who is a settler on his farm. There have been subsequent persistent unlawful arrests and detention of the people in this community “

They called on President Akufo Addo, the IGP and other stakeholders to intervene to bring finality to the land dispute on state acquired lands for persons displaced by the construction of the Akosombo Dam.

Reacting to the allegations levelled against him during the press conference, Osabarima Bosompem Ayirepe II explained that the area was not properly acquired by the government as state land.

He said, therefore, the occupants of the land are squatters.

“They are squatters. Should the Akyems begin to react to what they are doing it will not augur well for all of us. The land they are occupying is for Akyem Abuakwa Traditional area. Can any Akyem or Ewe go to Manya Krobo and Volta region to misbehave like what they are doing? we have reported them to the Police. If they say the area is state land that is not true. The state didn’t pay compensation to anyone. So it is not state land.”

He continued “Our lawyers are going to contest this. Can you acquire land by just a word of mouth? They should go to their hometowns-Manya Krobo and Volta Region. We have lived peacefully with them for years but those that are causing trouble are squatters.”