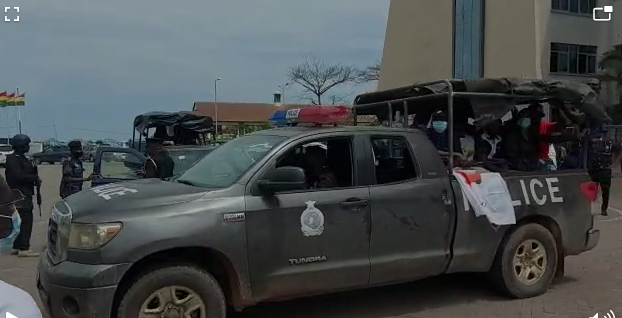 About 15 members of the #TheFixCountry movement who massed up at the entrance of the High Court have been arrested, including actress, Efia Odo.

The reason for the arrest is unknown, except that they were at the High Court to support lawyers of the group in a lawsuit that has been brought against them.

According to some of the conveners, a police officer on duty at the court instructed them to leave the premises and later called for backup.

The Director of Operations at the Accra Regional Police Command led the team to initiate the arrest.

One of the conveners, Brownson Adatsi in a Citi News interview narrated what happened.

“I don’t know the reason for which they have picked them up because they haven’t done anything. They haven’t disturbed the public peace, neither have they disturbed the court proceedings. They were at the entrance, and they have the right to hold whatever they were holding. We will follow it up and know what is next for us.”

This arrest comes shortly after the High Court dismissed a preliminary objection that sought to prevent the Attorney General from representing the Police Service in the case.

The lawyers for the leaders of the protest march objected to the Attorney General’s appearance in court on Monday, arguing that the case was purely and solely within the domain of the Ghana Police Service to prosecute.

But Justice Ruby Aryeetey of the Criminal Division of the High Court agreed with the submissions of the Attorney General in the matter.