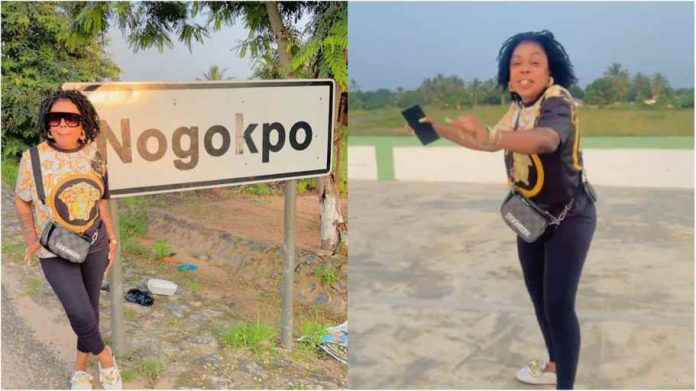 The fetish Priest in charge of the shrine at Nogokpo in the Volta Region of Ghana has condemned the inappropriate manner in which Afia Schwarzenegger conducted herself after posting on social media her picture with the signboard of the shrine.

Afia Schwarzenegger allegedly claimed that she paid a visit to the shrine for some form of spiritual awakening hence her decision to declare the stance of her private business with the people in charge of the shrine.

Torgbui Amuzu who is the one in charge of the shrine came out and utterly condemned in no uncertain terms, the derogatory manner in which Afia Schwarzenegger demonstrated herself because every form of business you deal with anyone at the shrine is under sealed, and the code of secrecy and the fetish Priest is wondering how come such an individual would claim of transacting business with the people at such a dreaded place and come back to the public and tell what unfolded there.

Even though the Chief priest did not state categorically if Afia Schwarzenegger truly came to them at the shrine for any spiritual consultation or not but rather he berated the attitude and posture of Swaznigar after she uploaded her pictures onto the social media after she claimed to have visited the shrine for consultation as she stood beside the signpost of Nogokpo.

Some people earlier thought it might be a possible case of photoshopping but as the priest came out and vilified her for her misconduct, it settles certain parts of her claims that she went there to consult them on some serious spiritual awakening exercises.

People who operate in such centers, there are terms of reference and stipulated rules and regulations governing what they do and anyone who goes there for any consultation, such terms are spelled out to such individuals, and for anyone who goes contrary to it, there are severe punishments that would be meted out people who flout the directives and it is believed that the same instructions were adequately explained to her if or when she visited the shrine for the spiritual consultation as she claimed earlier.