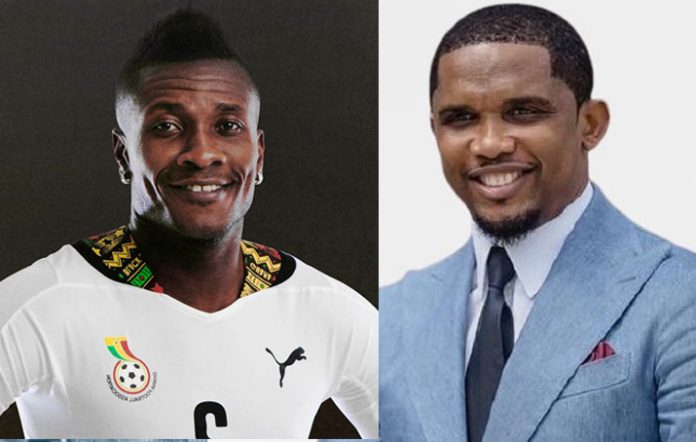 Former Cameroon star Samuel Eto’o is delighted to learn that Asamoah Gyan is eyeing a return to Ghana’s national team, the Black Stars.

Gyan, who has not played for the Black Stars in three years, earlier this week expressed his
ultimate desire to make a comeback and feature in the 2022 World Cup in Qatar.

The legendary striker has not played in almost a year, but he is optimistic about getting back into shape and being considered and called in the National team by Coach Otto Addo, the coach of the Ghana Black Stars.

After expression of his willingness to stage a comeback into the Black Stars, numerous Ghanaians have voiced out their opinions with the majority being against the desire and intention of his return but Samuel Eto’o who is now the president of the Cameroon football Federation, said on Tv3 that he is highly elated that Gyan’s all time top striker and scorer wants to play in Qatar.

However, Eto’o added that the decision to include Gyan is in the hands of Otto Addo, who will name Ghana’s final World Cup squad. Gyan has six goals at the World cup, making him Africa’s leading scorer. Ghana will face Portugal, South Korea and Uruguay in the group stage of the World cup, which begins on November 20th.

Samuel Eto’o the Legacy Ambassador for Qatar, is in Ghana for a two day working visit.
But, in a full support of Gyan’s intention to return to the Black Stars, the former public
relations officer of the Ghana Football Association and a renowned football and sports
journalist in general, Dan Kwaku Yeboah has thrown his weight behind Gyan.