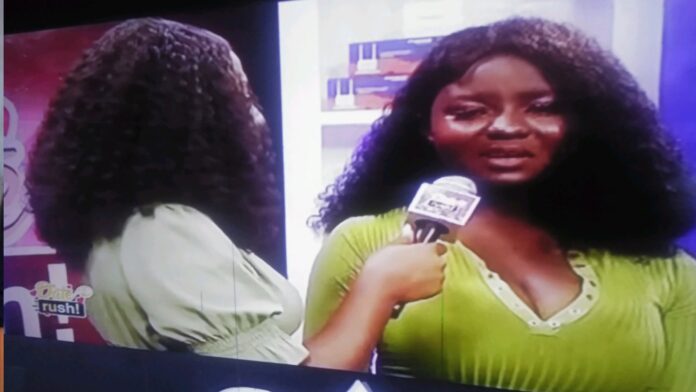 It is said that one can not judge a book merely by its cover but sometimes a tattered book tells that it contains an ancient information.

It is not surprising that Celestine, a twenty year old single mother came to Date Rush to convince ten handsome gentlemen that she ought to exit the stage with a date.

On the stage , many of the guys feared to pick Celestine because of the narrative. She said she became pregnant few days to when she was booked to travel to the United States. What was disgusting to her dad was the fact that ,she was only 17 years at that time and the manner of disgrace that she had delivered to her family .

According to Celestine , she was too young to give birth but her family did not want her to commit another crime known as abortion and so she had to face the world solidly .

She mentioned that her father ,in a bid to cancel her traveling dreams , burnt her passport to prevent her from traveling to the United States. We can not understand why Celestine would reveal all these just because she was anxious to grab on the Date Rush show . Is it that she was putting some stories together or she just wanted attention or better still ,she wanted a genuine partner .

The truth is that ,she is still too young to start looking for a guy and many analysts believe she needs to rather concentrate on developing a skill or two or further her education since she is from a rich home .