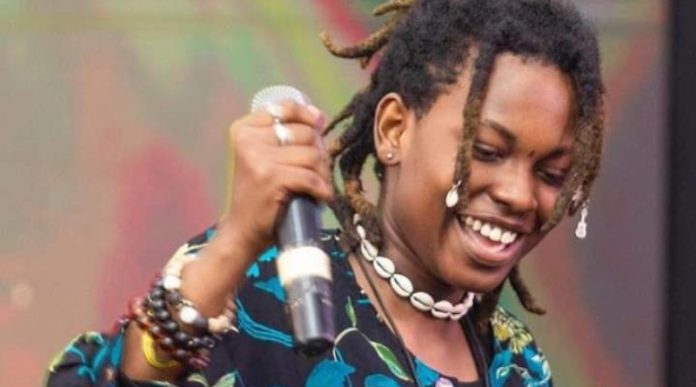 Barbara Naa Nyarko, the first female winner of MTN Hitmaker and a former signee of Burniton Music Group, has admitted that despite having signed a required 5-year contract, she only stayed with the company for six months or less.

OV, who had previously remained anonymous, stated in a shocking tell-all interview with NY DJ on BTM Afrika that the label’s head, Stonebwoy, who was at the time abroad, texted her to inform her that her contract had been terminated.

The Shush hitmaker claims that she is still unsure of the precise reason for the termination.

Asked if she breached the terms of her contract, she responded in the negative saying, “Nothing really happened. I wanted to be there, I was there, I did my thing, I learnt some things and it ended. I really don’t know what happened, I can’t tell up until today. He (Stonebwoy) texted me saying that he doesn’t want to work with any of his artists anymore. I asked questions, and I went for meetings but it wasn’t clear.”

Regardless, OV is proud she had the opportunity to work with the label.

“I was hurt but I’m very ok. I really wanted to be there (Burniton Music Group) because I genuinely liked the artist (Stonebwoy) and learn a thing or two from him,” she said.

As part of her package, she was supposed to be handed over to a management team. However, she chose to work with Burniton Music Group.

“I spoke to the boss of Charterhouse (organizers) who asked if I really wanted to be there since there were plans for me already but I insisted since I admired the man (Stonebwoy).

OV opened up on a number of issues including her health and more.

Watch the full interview below.