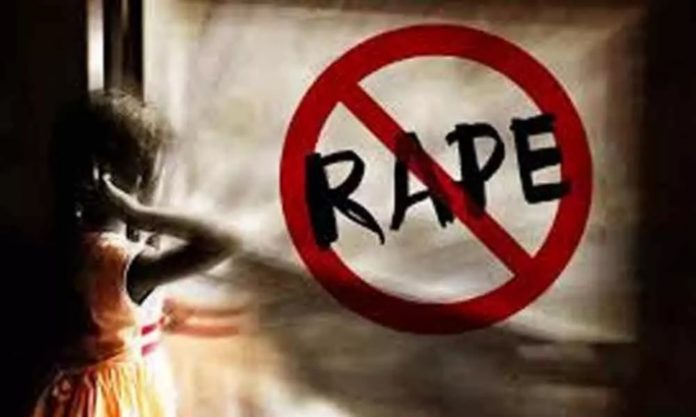 A first-year student of the Kwame Nkrumah University of Science and Technology, (KNUST), in Kumasi, has been sexually molested under coercion by a gang of six youthful exuberant, including her boyfriend.

The incident happened after the girl was lured into the act by her boyfriend without revealing the whole motive behind the conviction but afterward, the lady became apprehensive of his conduct which was somehow, quite late for her to defend herself when they pounced on her one after the other to satisfy their sexual urges.

The police officers at Asokore Mampong, are currently investigating the whole incident to unravel the mystery behind the entire situation leading to the causes of sexual activities involving the six people who were alleged to have had sexual encounters with her severe times one after the other when her boyfriend also engaged her in another sexual escapade without listening to the moaning and groaning of the girl when she realized the acts engaged in by the guy were becoming too severe for her to bear in pains.

The alleged six individuals who gang-raped the first-year student of the Kwame Nkrumah University of Science and Technology, are currently in the firm grip of the police administration in the Ashanti regional town of Asokore Mampong after they were arrested when a tip was given to the police officials about their dastardly conducts causing the abuse and molestations of the said girl in the incident.

They have been subsequently arrested and remanded into prison custody after other preliminary findings are going to be sought against their criminal and unpatriotic behaviors which in turn, spread and broadcast on the entire campus and the surrounding communities incurring shame and reproach for the girl in question whose moral dignity has been violated when they engaged her in sex under the duress which having sympathy on her privacy.

It was reported by some sections of the media that, a certain police officer too, took part in the act totaling the number six when he and the boyfriend of the victim conspired and connive with each other to unleash their sexual egos on the said girl who was rumored to have been denying her boyfriend sex whenever he demands it after the guy claims of spending his daily sweat of her personal needs and provisions.

The cause of the whole incident involving the girl and the other six emanated from the misunderstanding between the guy and the girl who have been in an amorous relationship for a while now but according to some detailed information communicated to certain individuals by others on conditions of anonymity, a misunderstanding ensued between both parties over the inability of the lady who has been raped under the duress, to giving sex to her boyfriend when ever he asks for it and because of that, the guy feels furious that, how come he would be spending his money daily basis on the girl just in the name of love but when ever he desires to satisfy his sexual urges, the said girl would be denying him the opportunity and it is on that very premise that, he intentionally and clandestinely, planned with other people including the ones that had been arrested and remanded into prison custody while awaiting further and better particulars regarding the finality of the case determination, that he is going to teach the girl a bitter lesson by paying her with her own coin which true to his words, he really committed himself into it by hiring other ignoble individuals to assist him execute his coveted plans easily but unfortunately for him though he satisfied his sexual egos after sleeping heavily with the girls on several sexual counts, he has found himself in the shackles of the law and he is currently languishing in an excruciating pain in the cell of the police administration at Asokore Mampong, Ashanti region awaiting the transfer of the case for court processes when final investigations into their nefarious activities against the privacy of the victim, are concluded.