Krepin Diatta has been going through a lot when it comes to being mocked by his fellow Africans, here is his simple message to those mocking him.

After images and videos of Krepin Diatta started going around on social media, many poured onto the internet to troll his looks, teasing him even further after it was discovered that the midfielder, who plays for the Belgian side, Club Brugge KV, had an even “better-looking” girlfriend.

One troll even went as far as sharing a photo of Krepin Diatta with his beautiful white girlfriend and called them “beauty with a beast.” Another person also said if given $50 million dollars she won’t marry him, because she can’t walked down the aisle with a frog. 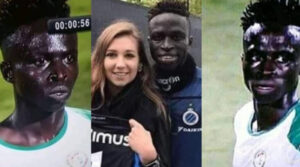 Reacting to the insults he has been receiving on social media, the 20-year-old wrote this emotional piece.

This is what he had to say on social media: “I am very sad to see some African brothers making fun of me. I work for our beautiful and dear African continent and what I receive in return are only insults, mockery of my brothers. This is too bad of you and racism comes from there.

I need your encouragement and not your insults. Thank you to everyone who supports me. Only God makes my strength and I am proud of my physical person. Your mockery won’t change anything in my life. But one thing is for sure, we are all African.”