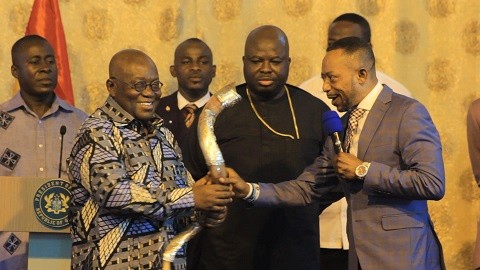 The loudmouth-speaking proponent of the regime of the president, Nana Addo Dankwa Akufo Addo, has revealed that he does not pray for the success of his presidency again because he has realized he forsook God a long time ago hence his decision not to have him in his diary anymore.

According to the pastor, Owusu Bempah, gone by the days when he would vent his whole lifetime and energy praying fervently for the current president so that he could be able to govern the country wisely but not, but it is clear enough to him that, the president does not have God at heart and that is the main reason why he has deleted him totally from his history book.

Pastor Owusu Bempah is well known to be an ardent supporter and a staunch loyalist although he is perceived to be an abhorrent and fierce critic of the erstwhile administration of the former president John Dramani Mahama. In the view of Owusu Bempah, he could see that since he put it on his chest not to pray for the president any longer, he could see things are not holding up as they should be and it is a clear testament that due to the ultimate cancellation of his intercessions, everyone has fallen from head to toe and that is the reason why the country is heading into the wrong direction as earlier attested by the majority of Ghanaian people in the report of Global Info Analytics polls.

The government has remained silent on the accusation leveled against the president that, he has willfully forsaken God Almighty and because of that his unsubstantiated claims, he would be called to order but it looks as if what he has said is something to go by and as such, no communication is coming from the office of the president and thus, it is assumed that, what had been proclaimed by the man of God.

it is something to lean on because a leader with the vision of God, does not lead his people with his philosophy which is not helping the nation to move forward in any way. It is often said that the one who loves you could be the same person who will hate you outrightly and from the look of things, that is exactly the case involving Pastor Isaac Owusu Bempah and the president of the republic of Ghana, His Excellency. Nana Addo Dankwa Akufo Addo.