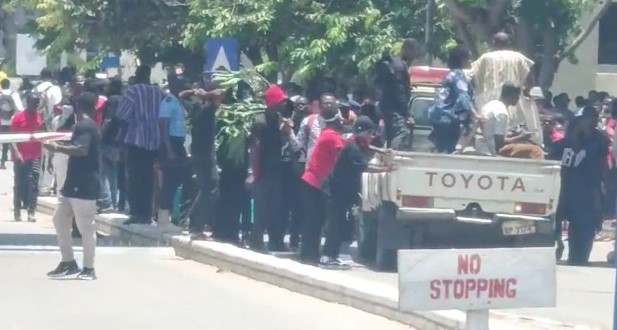 Discrepancies as they called it; has turned out to be a day’s broad daylight nightmare for the students of the University of Education Winneba, when they were met with heavily armed police officers during the registration of their displeasure against their release examination results.

They students began their protest over what they claimed to be discrepancies in their examination results for those at level 400 as matured candidates, took over the streets to drive home their demands saying, they called for remarking of their papers.

As the police officers on the ground could be bear with what was ongoing between the school authorities and their students, they fired tear gas severally in their attempt to disperse them from demonstrating against the school management.

According to the students, they never thought that a whole university could be so partially shaded with the marking down of examination scripts just to fail students that they are not in consonance with but suddenly passing out those who do not qualify to be certified.

The demonstration started peaceful and on a pulchritude atmosphere prevailing winds amongst the students body when unexpectedly, some of the students involved in the protest turned into violent attacks against the authorities of the school management which necessitated the school hierarchy calling for police re-enforcement to put the conducts of the students under control before it could escalate getting out of hands.

It is not all that surprising and shocking to behold students at the higher educational institutions nowadays coming out with their personal grievances against their school authorities because, they have come to clearly understand about violation of their fundamental human rights.

Such students with human rights matters, are the ones making the managing of the student affairs in general at various university schools ungovernable since they are able to rally around themselves a large chunk of students in their favour against school managements.

But since the police officers have been called into the premises of the University of Education Winneba to control the situation before it gets out of control, there is an easy calm atmosphere prevailing currently in the school though some of the students in the school are not completely kept abased, the security forces on the ground are on top of the situation.
Source: www.ghbuzznews.com