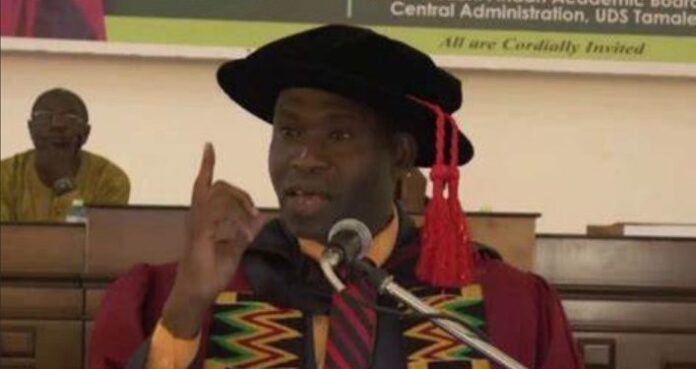 The University For Development Studies, UDS, has seen its fifth Vice Chancellor in the history of the school for over almost three decades after the establishment of the premier and high institution of learning ago.

Good news is swimming down on the cheek and face of Professor Alhassan Seidu, as he fully takes over the reigns of administration at the University For Development Studies, UDS, fifth Vice Chancellor to attain to that topmost rank of the school after it had been founded in the year 1992 by the former president of the republic of Ghana, His Excellency Jerry John Rawlings of blessed memory after death laid its icy hands on him some few months ago which shocked and shook the foundations of the country.

Professor Alhassan Seidu, is a well cultured and astute academician with competence across diverse spectrums of dexterity and he is mounting onto the mantle as the next vice chancellor of the school which is touted as next to the University of Ghana Legon as it continues to churn out credible and responsible graduates for mother Ghana who are changing and transforming lives by, creating their own jobs and touching the lives of individuals unlike in some instances of other graduates upon completion of their national service, they are rendered completely profuse sweating jobless candidates.

It is believed that, the current incoming administration head of the university, Professor Alhassan Seidu, he has been tasked to drastically transform the academic and leadership qualities and records of the premier university in Ghana as that of University of Ghana because the perception index analysis of the general public is perceiving that the next changing and transforming university that touches the lives of people in the country is University of Development Studies, UDS after Legon.

It is a notary fact that, many of the people who had attended the University For Development Studies, UDS before, such individual persons are well endowed and established than any other people coming from various tertiary institution in the country because such individuals are creative and innovative, trying to venture into some profitable despite the unfriendly environment created by the economic infractions prevailing in the country.

It is quite rare for you to chance upon seeing and hearing from anyone on the streets that he or she is a qualified graduate having the alma mater as UDS, lurking around aimlessly due to unavailability of jobs in the country because they always try to lay their hands on something meaningful and valuable so as not to become the advocate of the devil with the reason that they are taught in clear terms with the saying that goes as “it is the devil that finds work for an idle hands”.

Currently, those who are working across the academic frontiers of an education, are extending their felicitations and congratulatory messages to professor Alhassan Seidu for attaining such a hilarious and magnificent feat in his lifetime as a result of his dint of perseverance and assiduousness on grounds of meritocracy.

We congratulate everyone who bends on changing, touching and transforming the lives of our beloved children through the academic activities established in their various educational institutions nationwide and worldwide.