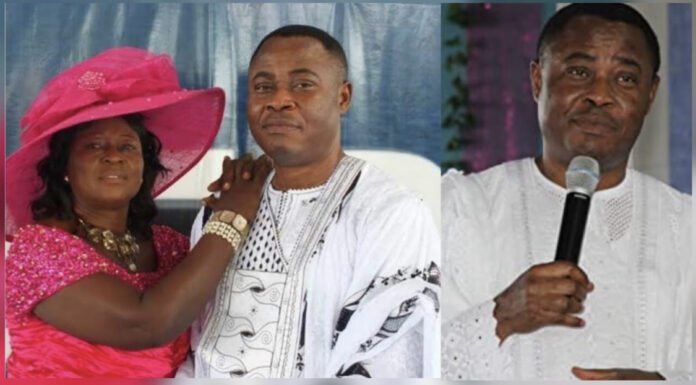 The quest for supremacy and power, continues to cloud religious activities and the lust for Godly practices and doctrines are still in total decline at the ministry head quarters of the Resurrection Power New Generation Ministries but rather, the leaders only contend to attaining higher heights in life financially.

The founder of the church and general overseer, Rev. Anthony Kwadwo Boakye, who has become medically incapacitated for a while now, has decided at last, unleash his wrath and vexation against his beloved wife, Rev. Mrs. Anthony Boakye and her entire family members after reports of her alleged involvement in seeking to control the financial administration of the whole cause of the church, got to his stable over the weekend.

According to Rev. Anthony Kwadwo Boakye, he has been receiving complaints mostly on daily basis about how his wife has been trying very hard within her personal means to steer the affairs of the entire church when it comes to how the resources of the organisation are to be utilised as he is currently out of touch with the reality on the ground.

He further indicated that, she forgave his wife on countless occasions where it was established that she misused some resources which she could not render any coherent and thoughtful accounts before the church management body but this time around, he is not going to leave any stone unturned.

He therefore, even though he is still not medically fit as a fiddle, he has cursed his wife and her whole family with the current sickness that is inflicting on his health saying, it shall not be well with her in her generation and her entire family members thereby stating emphatically that, as he, Rev Anthony Kwadwo Boakye, has reversed every form and part of his ailment to his wife and her whole kinsmen on ground that, she is trying to intrude into his finances and other related matters, pertaining to the effective running and conducting activities towards the growth of the church in general.

It suddenly beats the imaginations of some concerned members who witnessed the sad drowning raining of deadly curses on the life of the woman by her own husband who is the father of the whole church which is the house of God to act and behave in such an immatured and unreligious manner by the pronunciations he declared on the life of his own wife after some bit of misunderstandings ensued between them arising out of money related issues after the offerings and tithes offered by the members of the church were collated when service closed on Sunday.