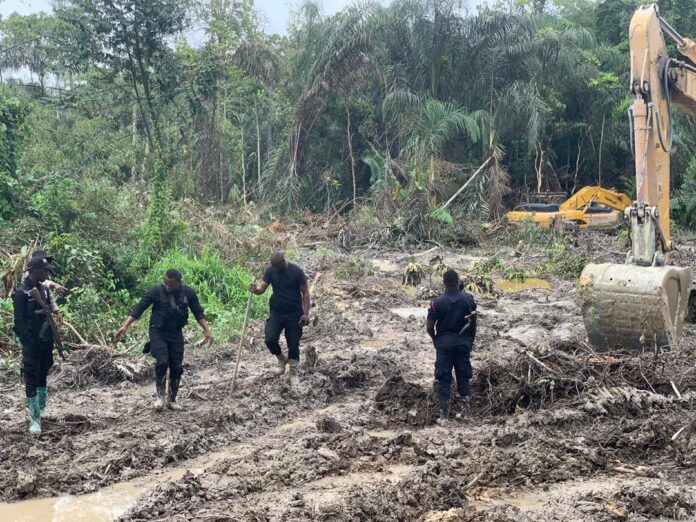 The operations and intelligence security forces working day and night at the sites of where illegal gold mining activities popularly known as galamsey have become prominent and prevalent in many parts of the Western Region of Ghana, have, in a joint collaboration, caught up and arrested a district chief executive officer and three other accomplices in matters relating to the said heinous activities in the region.

According to police public release, they have arrested a district chief executive and three other individuals who attempted severally by obstructing the security forces in the Ellembele areas from the seizure of some suspicious machines and others excavators being used by such notorious miscreants who have been degrading the earth into police officers custody for more and further investigations to be conducted into their illicit complacency with issues surrounding their alleged involvement in the galamsey operations.

Western Region has been coming into the news nowadays for almost the wrong reasons as the Electricity Company of Ghana, ECG, issued a press statement about some dangerous and nefarious illegal connections of electrical power being used by the residents without State approval.

The region has been reported as the hub for countless cases of illegal political galamsey operations as notable individuals in the community are believed to be the brains behind the unlawful operations and prospective sourcing for the search of gold entombed beneath the earth in the enclaves of those far reaching communities in the region.

As the district chief executive has been reported to have been captured in this laudable operational intelligence conduction system undertaken by the security officers who have been mandated to embark upon such nation saving exercises, it is assumed that the district chief executive, knows something reasonable about the illegitimate operations of galamsey activities in the Ellembele areas.

Our audiences must bear it in mind that, the said DCE who is currently behind bars, is the same individual who is the head of security in the entire district of Ellembele and its environs and therefore, the law enforcement authorities who have jointly captured those with the found excavators, must be largely applauded and rewarded for doing marvellously.