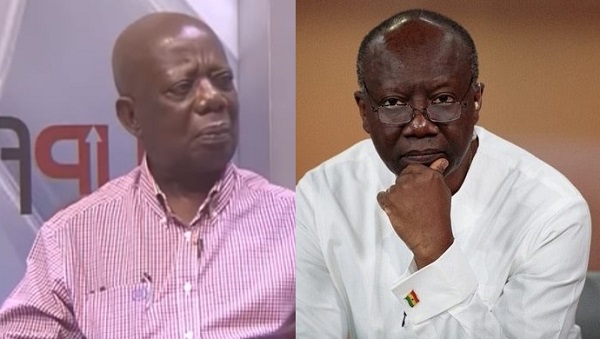 A former Chief of staff in the erstwhile administration of John Agyekum Kuffuor, Kwadwo Mpianim, has appealed to the president of the Republic of Ghana, His Excellency Nana Addo Dankwa Akufo Addo to take decisive action against the minister of finance and economic planning, Ken Ofori Atta the same way he swiftly dealt with Hon. Sarah Adwoa Safo in the past week when the president communicated to the country about his decision on the absence of the said dismissed minister of state.

Mr. Mpianim holds the view that six years into the administration of Nana Addo Dankwa Akufo Addo, there is no single instance of a reshuffle so that the ministers who are underperforming should receive the knock but nothing of that sort is happening in the country and that is the main reason why the ministers have relaxed on their mandates and duties expected of them to execute.

Mr. Kwadwo Mpianim is a well-known individual in the running of affairs in the New Patriotic Party at the leadership level but this time around, some believe that his days were over, and thus, even if he speaks now, it does not hold water, unlike those instances that he was in power with full strength and authority.

Scores of people had earlier advocated for the removal or reshuffling of the finance minister due to the growing concerns of financial instability and destabilizing status of the local currency because things are not picking up the way they are expected to be so and as such, they insisted he got dismissed from office to pave way for new blood to take over the running of the ministry.

Some are still arguing that no possibility portrays the fact that the president will be changing with someone else because they are birds of a feather and thus they are walking together.

The economy of Ghana is still in a state of quagmire and comatose arena since it is struggling to survive under this current economic unfriendly environment created by the government of the day spending with profligacy and misapplication of state resources without rendering any thoughtful accounts.

Therefore, it is going to surprise or shock anyone who is closed to the administration of the state to hear or learn that the president has given a red card to his confidant royal blue Caribbean cruise ship who is managing his private assets for him and his entire households.