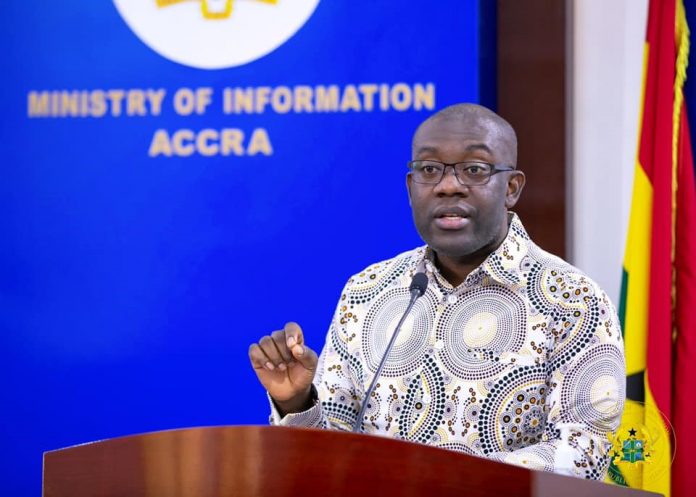 The minister of information, Kojo Oppong Nkrumah, has indicated that some trusted and reliable sources of details available before him, are revealing that some unpatriotic citizens of Ghana, are devising ways and means to cause anarchy and seeing the downfall of the Akufo Addo government for their parochial interest without thinking twice about the peace and security of Ghana and those who live in her as a whole.

The minister disclosed that the intention of some people who are feeling disgruntled because they are no longer at the political helm of affairs is scheming with evil intentions to instigate Ghanaian youth against this incumbent president and his appointees.

He further revealed that his facts are clear enough for him to believe that, what happened during the demonstration involving the members of the Arise Ghana protestors, is just the tip of the iceberg because more turbulent and bloody thoughts are being harbored in the minds of certain groups of people just to see the collapse and ruin of the political administration of Nana Addo Dankwa Akufo Addo.

According to him, very soon, he will disclose the identity of those behind his revelation that they are planning coveted to launch destruction and catastrophe on the country because of how aggrieved they are feeling as to why they are not the ones governing the country at the moment but rather some people else.

He intimated that such individuals are known members of other political parties even though he is not ready yet to openly figure them out but at the right appropriate time, time would tell how he is going to expose those people beyond their denials, Ghanaian people would know that some individuals are only claiming to love the country just to influence the choice of decision making on the part of Ghanaians in sympathizing with them when they one day approach to canvass for their votes.

Others may be wondering why the information minister is trying to cause fear and panic in the country as he comes out to tell Ghanaian people that certain individual members in Ghana are planning intentionally to destabilize the peace and security being enjoyed by the masses of the country, Ghana.

Some people are patiently waiting for how the other opposition political parties are going to respond to these very nerve-cracking and disputatious claims against those undisclosed members of Ghanaian society.