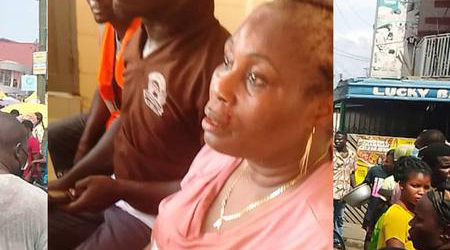 Alleged wife of the Takoradi daylight robbery victim who was killed on Monday, April 12, 2021, has discloses some information about his husband, Mr. Charles Kwakye

The wife whose name is given as Akosua Dufie Cecilia is based in the United States of America. According to her, she got married to the late Mr. Charles Kwakye on August 11, 1985 and both have 4 children together.

She narrated that the woman who is claiming to be the wife of Mr. Charles Kwakye when the incident happened is not been truthful. She indicates the self acclaimed wife whose name is given as Monica Ndah is just another woman in the mans life.

Also, she revealed the man left her and his children to a business trip in Ghana only for him to be in the company of his “side chick”. She added that, the man is not 61 years as the public has been made to believe and the lady who is in the mans life is based in Switzerland as both of them planned to make a trip to Ghana and spend good time together.

She said “The woman is her girlfriend based in Switzerland not his wife. They both decided to meet in Ghana and have a good time. I have four children with my husband which we got married on 11th August 1985. Our first born is 35 years and second born is 31 years which they both base in Ghana with the other two with me here in America.”

“I believe the girlfriend of my husband is an agent of the devil. I had a dream and saw my husband in front of me telling me he is in bondage and wants to be free but he can’t.” She added.