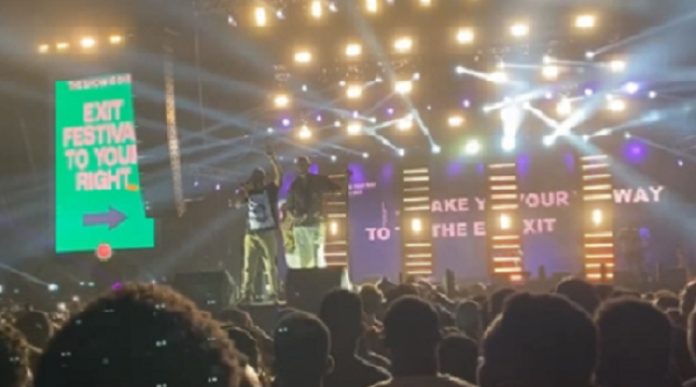 The Accra Afro Nation performance was cut short due to uncontrollable conditions, according to the event’s organizers.

After a lively Day One that featured a dozen local and international artists performing for the thronging crowd, the hugely attended concert was on its last day.

The atmosphere and anticipation for Day Two remained similar up until a few minutes after midnight on December 31, 2022, when performances were suspended due to reports of crowd control concerns at the main gate.

Organizers later mounted the stage to explain that for security and safety reasons the show needed to end abruptly.

“It was clear that the place was filled out but we had a lot of selfish people who decided to turn up at the door… for whatever reason they wanted to rush the door.

“At this point, it’s gotten too much for security and the police that we’ve got back there. As I mentioned earlier, it doesn’t matter what is going on there. If any of you leave this place in a body bag, that would be on us,” one of the organizers mounted the stage to announce.

“And that is one thing we don’t want to happen. At this point, I want you to understand that the reason why we ending this show is for your own safety… right now I is crazy outside and we want to make sure you guys leave in the safest way possible,” he continued.

On social media, people are angry at the turn of events, blaming the organizers of giving them a raw deal by truncating their experience because of ‘outsiders.’