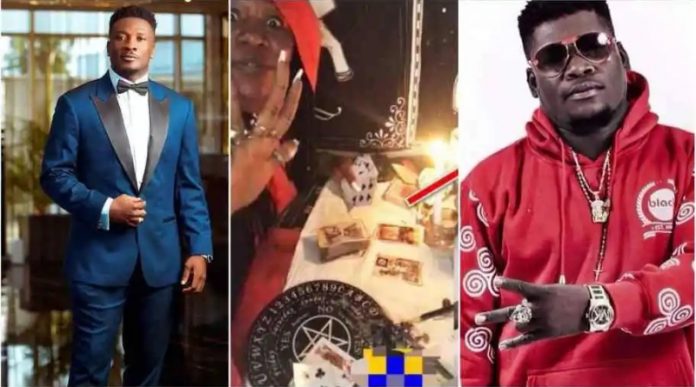 has for years ignored the spiritualist who claims he had a hand in the disappearance and death of singer, Castro, but not anymore as he has threatened to deal with her over the false accusations.

“If I descend on you…” Gyan said in the video while jamming to Hannah Marfo’s ‘Akristofo Adooso’ song.

Shortly after the footballer’s video to Daughter of Maame Water went viral, she took to her TikTok account under the name Akosua Moon Goddess to further make a damning accusation about Ghana’s celebrated footballer.

In the video sighted by Ghbuzznews, she dared Asamoah Gyan to do his worst.

“Descend on me, do I look like a Christian? I am not making my revelation under the word of the Bible. I am not afraid of anything, so if you claim I am lying descend on me. I am waiting for you. Who told you I need the attention of killers?” she fumed with rage.

She further alleged: “I don’t need killer’s attention so if you claim what I said was false, stand up, get up and descend on me. If not, I will personally descend on you because you actually did it. You actually killed your friend.”

The Evidence Act of 1975, Section 33, states that a person can be declared legally dead after seven years by a court, where the person in question has not been seen or heard from in seven years despite diligent and persistent efforts to find him.

Originally known as Theophilus Tagoe, Castro went missing with Miss Janet Bandu whiles on holiday with the Gyan brothers at the Ada Estuary.

The two were said to have drowned as the Jet Ski they were on was retrieved from the river after their disappearance. Efforts to retrieve their bodies by a number of fetish priests and religious leaders have all proven futile.

Gyan was subsequently accused of ritual killing but denied involvement in the disappearance of the pair.

A statement from Gyan’s camp read:

“Now, we take the opportunity and state without the slightest doubt in our minds that we are not blamable for the disappearance of Castro and Janet Bandu. We had no hand in that occurrence. We have no moral or legal culpability whatsoever.”