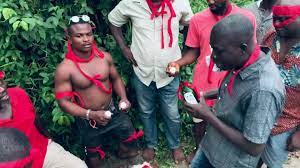 The Kwabibirem United football team supporters have descended on the officers of the Ghana Football Association, GFA, with unprintable words of malice and harm for what they called unfair treatment meted out to them after they were caught willfully and intentionally fielding an unqualified player into one of the recently held football matches which later proved to be the case.

The supporter base of the club, has become furious and angered saying the Ghana Football Association executive members were biased against them because they were not fair enough in handling the matter involving their team which was accused and implicated in fixing a certain unqualified player into the match which they recently played and afterward, they took such a bold and audacious stance on their bad and illicit conducts to serve as a deterrent to others but the club supporters were livid about the decision of the Ghana Football Association executive members which they are saying, they will show them pepper and where exactly power lies.

They have taken their position on the declaration made that they would be embarking on certain activities against the lives of the Ghana Football Association officials who treated their football team with the thought of partiality and prejudice therefore, they are going to avenge offense on those individuals.

Such people as they earlier indicated unleash something harsh and painful on the lives of the officials who took that unfair action against them as they simply put, cursed the officials involved in the case at a certain identifiable location where some of the people coming from the support base of the team were caught red-handed in evil conducts and pronouncements against those undisclosed members in the Ghana Football Association with activities of paying them back in their coins with curses and negatives behaviors which must not be the most appropriate way of solving differences between people in society.

Those who are aware of the whole incident where the club was punished for fixing one certain individual who was deemed unqualified and illegitimate to be part of the game, are totally in support of the decision and the action taken by the football authority that oversees the football activities in the country in general as a step in the right appropriate direction because if such conducts exhibited by the players are not severally penalized, other club owners will also continue to be doing the same thing.

As it stands now, the club that got involved in the case of fixing an unqualified player into the match has been demoted to the third-tier position.

If it is good news to those who are benefitting individuals from the relegation of the Kwabibirem United Football club, then, they should congratulate the Ghanaian football Association executive members for doing the right thing which is thought to be a good action devoid of malicious intentions.