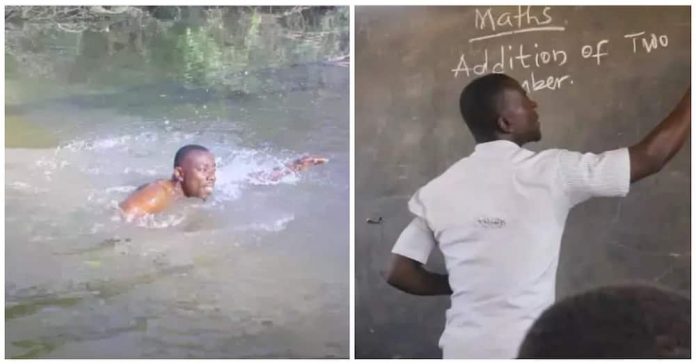 There is a certain particular video that is currently trending on the internet about a certain male teacher who regularly swims on daily basis before he goes and teaches his students in the near by community.

Many people have started congratulating the said teacher for demonstrating his high level of patriotism but others were quick to rubbish such an attempt from the teacher in the video which has gone viral.

It is not however clear how his learners are being able to be present in the classroom structures for him to teach because from the look of things there is no other means by which he could gladly impact knowledge into those teenagers except to embark on swimming before he could reach out to such children who are looked up at the other side of town due to unavailability of infrastructure facility.

The said individual teacher has been seen in the viral video swimming with his school attire trying so hard to go to school but how to cross the water which obstructs his easy access to the nearby town but he must swim to be able to go and teach before he could get something for his daily bread.

Other people are wondering if the very individual teacher in the video teaches at the government school or the private sector because it is not comprehensively visible to us at the time of filing this sad incident involving the teacher who went to school after graduation to enjoy his life is presently going through such a nightmare just in the name of a so called patriotism.

His attitude could be describe by many as something that defies human thinking and logic because how on earth would a teacher who is a role model to others will in broad daylight swim for some minutes before he goes and teaches in the next village? What sort of a national patriotism is that?

It is a pure and a classical case of a failed common sense application which must be noted by an extension condemning it in all clear and visible terms head on.

Such a teacher should not be applauded by ay right thinking individual because he does not even study his notes before going to the class room to say he is a teacher to the students based on how he keeps his books in the premises of the school until the next day before he picks them with the excuse that it is as a result of his difficulties in the means of transportation to the school.

The question that must be asked is, does anyone go to school to become a slave to his country? If yes, then the political leaders and their appointees should do same as an example to those who have the country as hearts.

In this contemporary world where people in some certain African countries are inventing wireless television sets and other valuable appliances which will make life easier for their families and loved ones by an extension the citizens as a whole, teaching staff members are swimming down through a river to go and teach where the leaders of that very nation are driving four wheeled drives because they think they are the appointing authorities in the country.

If those who are condemning the manner in which the said teacher does his things are also being berated and condemned, they should also tell us if they can do the same thing for mother Ghana.

It feels as though there are certain crop of people in this failed and fast retarded state are being more Ghanaian than any other individual because of the manner in which some people coming from certain parts of the country are treated in an inhumane manner without feeling compassion for them.

Ghana is not worth dying and for that reason there should not be any reasonable justification as to why some people should be encouraged to embark on such a deadly journey in swimming because of their love for the country.

It is so shameful and disgusting and it must be condemned in all uncertain terms without having any regard for whosoever it may concern.