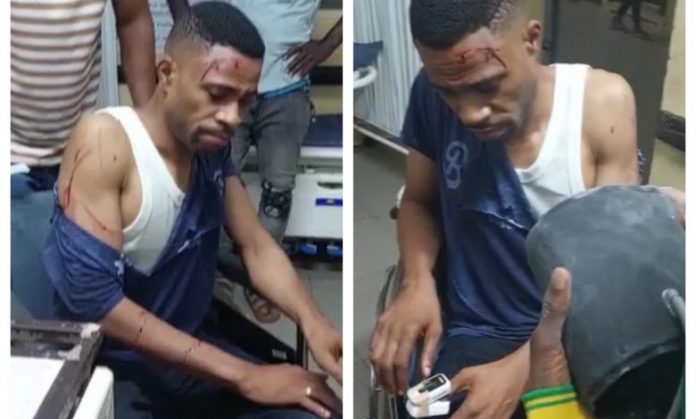 Attacks on one of Ghanaian journalist Kofi Adomah over the weekend has finally been reported to the Ghana Police Service and the authorities have initiated full-scale investigations into the circumstances under which the attacks were unleashed on Kofi Adomah, were embarked upon.

On Saturday, A broadcast journalist was reported to have been severely wounded by certain unknown assailants who mounted surveillance to unleash their Vernon or anger on him without any tangible reason known to the journalist in question.

In the precious few weeks, Kofi Adomah was in the news like wildfire after showing or revealing his wife on social media which he rained showers of blessings upon the woman for staying in love with him till now during his thick and thin moments even though he impregnated other women while married to his very wife but the woman even continued to support him financially to go about his business activities without any scuffle between both of them.

It is believed that the Kind of social media engagements he had with others, might be a contributive factor as to why he has been attacked where machete wounds were inflicted on his body parts and later, such individuals fled from the scenes of the incident.

He, therefore, lodged a formal complaint with the Ghana Police Service officers about the deadly incident that occurred to him over the weekend even though he is not having a grudge against anyone who he could easily point out that it is that particular person who instructed those assailants to unleash the attacks on him.

Some people in Ghana, are not security conscious because of the manner they display and discuss their private matters on social media platforms just in the name of fun fare activities and enjoyments forgetting that their foes are watching them closely.

The level of the security situation in Ghana at the moment is volatile and fragile as terrorizing activities are not far from the borders of the country but a certain crop of people are not in any way concerned about what happens here or in the neighboring countries what are likely to have a toll on us in the country.

Meanwhile, the umbrella body under which the said journalist who was brutally attacked and maimed during the assault, came out and condemned the attacks launched on one of their members.

The Ghana Journalist Association, JGA, berated and condemned the unprovoked and unwarranted attacks initiated on Kofi Adomah over unexplained circumstances.