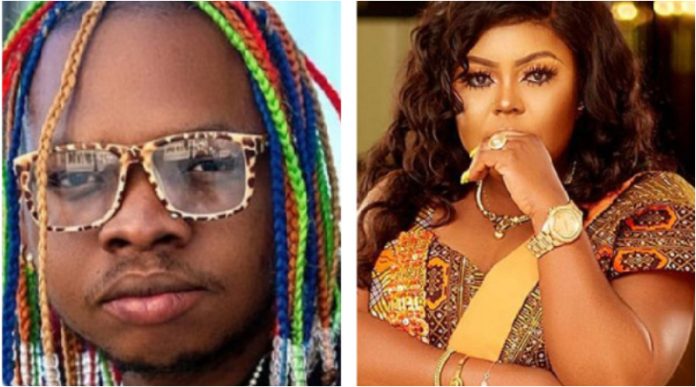 Afia Schwarzenegger, a Ghanaian socialite, and comedian, has launched a stinging attack against Nana Tornado for using her name too often.

Afia Schwarzenegger recently attacked, asking how much Nana Tornado was paid for telling media personalities Kofi Adomah and his wife, Miracle, some details about her.

“You are ugly, so, if you don’t have money, no one wants to sleep with you…” she struck. “If you thought going to talk about me will give you some money…[short pause] but you know what, they aren’t as rich as I am.

“The lady doesn’t want you as a friend, she only used you for her errands. Once a slave, permanently a slave,” Afia said.

While throwing more shades at the outspoken male socialite, she sarcastically asked her nemesis to send her his mobile money account since he depends on others for his survival.

“Did they give you a thousand or five hundred? Asi Bolanga has come, you know what, just drop your momo number, so, I can give you some little money. Since you came back, haven’t they had sex with you?” she asked.

This comes after Nana Tornado on July 28, 2022, mentioned that Kofi Adomah’s wife, Miracle, has dared to deal with Afia Schwarzenegger for coming at her husband.

Nana Tornado earlier shared a video asking Kofi Adomah to get in touch with him because he has a gist that will make Afia Schwarzenegger bend for ridiculing him.

Tornado in a video report he shared on his Instagram, said, “I have released the atomic bomb I wanted to give them but Kofi begged me saying, he wants the sleeping dogs to lie, but his wife, Miracle, says she won’t let this slide.”