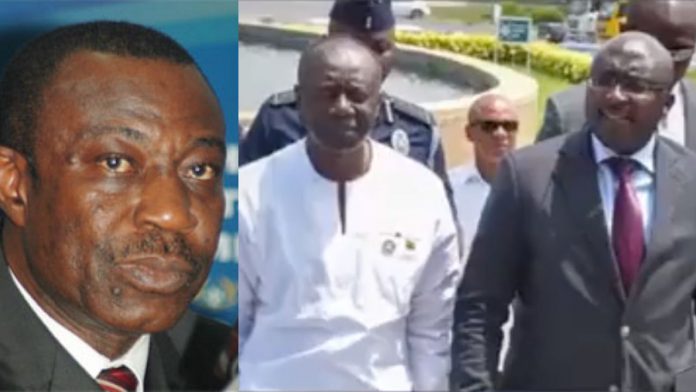 A leading member of the governing New Patriotic Party, whose alleged tape recording went viral on his condemnation of the performance by the vice president and the minister of finance and economic planning, about their horrendous and abysmal duties respectively, has denied ever making those remarks, assertions, and innuendos on the personalities of the above two individuals.

Anthony Osei Akoto was rumored to have uttered blasphemous and damaging remarks concerning his ultimate understanding of how poorly the finance minister and the vice president are performing.

According to the viral audio recording in which he intentionally uttered such disheartening and malicious statements in the twi parlance, had been purported to have said clandestinely that, the appointment of such individuals is superfluous and dangerous saying they must be sacked immediately or reshuffled before things completely get out of hands because, in his personal view, it is as a result of that their useless and needless appointment which has sunk the whole country in deep lamentations from the mouths of both old and young.

The secret audio recording, which Ghanaweb subsequently published with comments from many readers of the entire story supported by the recording, the alleged owners of the recording that he expressly stated in the twi parlance, has refuted the claim and by so doing, orderly distanced himself from those speeches recorded at his blindside and demanded unprofound apology from Ghanaweb and retraction of the said publication and forwarding of the voice recording with the same prominent they the publishers gave to the publication from their outfit.

Those who could not clearly understand what he was diabolically saying against the vice president and the finance minister, sought to hear the details of his disturbing utterances from some people who were commenting on the matter after learning of his uncouth mouth statements on those two gentlemen he willingly implicated in his obnoxious remarks.

There are certain individuals in the same political party, who think that if they are not the ones appointed to head some ministries then nothing meaningful would come out of that particular place and it should be noted that the same people are only hungry for political office to amass wealth for themselves at the detriment of the vulnerable individuals who are languishing in abject poverty due to the failures of this current administration to restore the economic fortunes of the country.

In the statement of the alleged comments spoken by Anthony Osei Akoto, he queried why the president himself knows very well that his vice president and the finance minister are not performing to the satisfaction of the nation but yet still he keeps them tight in their various portfolios without penalizing them because they are all doing the same thing whereby, running down the entire country roaming around foreign aids for the economic development of the country despite the numerous natural minerals and resources God endowed us from the time of old. Other people are of the view that he only uttered such derogatory speeches just to lambast and castigate mainly the finance minister because he wanted to assume that same position but the president did not give him such a mouthwatering opportunity to serve under his regime hence his decision to condemn the performance of the vice president and the finance minister respectively.

It is not he, Anthony Osei Akoto who would educate Ghanaian people on the happenings in this very fast deteriorating country because they are the ones on the ground day in and day out feeling the hardship created by this visionless and clueless government led by the president himself where there is no reasonable thought brainstormed as to how to transform the lives of individuals who are living in the country and by an extension, pushing the country forward as a whole.