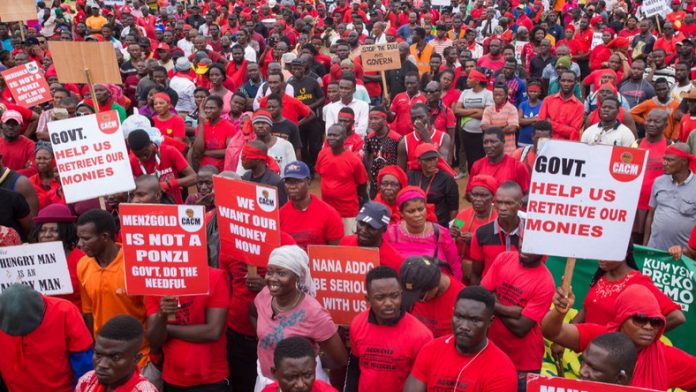 The protest embarked upon by organizers patronized by several members of the general public reached another turning point when the protestors stormed the premises of the ministry of finance and economic planning to register their disgust and dismay at the level at the economy of the country is being managed by Kenneth Ofori Atta and his two deputy ministers where it appears that it is almost impossible for the economy of Ghana to be salvaged from its current debilitating and comatose state which does not augur well for the financial stability of the country.

The demonstrators carried certain inscriptions in the Ghanaian local parlance which some read from the translated version from the English language as; ‘We are dying slowly” Ghanaian youth are suffering, the economy is in tatters, and there is no money in the country among other expressions.

The finance minister and his subordinates were informed ahead of the arrival of the protestors to be able to know to deal with their grievances even though there was no immediate remedy to solving the current economic unfriendly environment created by the profligate spending and financial malfeasance on the part of government and its political appointees in Ghana.

Ghana public police officers were detailed to match those protestors and their organizers to the ministry to prevent chaos and insurrection that might be caused by certain individuals in the group who perhaps, would like to jeopardize the peace and security of the country.

The police officers’ presence amongst the demonstrators was greatly felt as they were dispatched with massive numbers which almost overnumbered the total number of people involved in the demonstration.

The protest nearly took an ugly sight when the police officers battled it out with the protestors with rubber bullets and tear gas after they pelted stones at the police officers the moment they spotted the presence of the police administration re-enforcement officers who were standing by with the armored vehicles and accouterments ready to defend lives and public properties if or when the members of the group decided to go wild by an extension, destroying and attacking assets and liabilities of other individuals in the national capital of Ghana, Accra.

The police officers used maximum force to control the teeming crowd as they purposed to disobey the instructions and guidelines spelled out to them to comply. If it were not to be the timely response from the police officers, the whole thought to be a peaceful and orderly protest would have turned and twisted into a state of tragedy because of how demonstrators raged dangerously against the police officers the moment they arrived, was frightening even though there were some reported kinds of scuffles and confrontations unleashed on the people who took part in the protest.

The demonstration turned violent when police officers began to intimidate and harass the group members which they resisted vehemently on their part and it then resulted in exchanges of words and physical blows in some instances where those with lighted hearts fled from the scenes helter-skelter to avoid dangers on their precious lives.

But the police officers were able to arrest and detain over twenty-eight members of the group who threw heavy stones at the officers after dozens of Ghana Police Service Administration recorded harm, hurt, and injuries in the lives of its national officers.

The police hierarchy further described the conduct of the group as unfortunate, shameful, and disgusting as it completely lost faith and trust in the protestors because they went contrary to what was earlier agreed upon between both parties as rules of engagement designed for the demonstration.