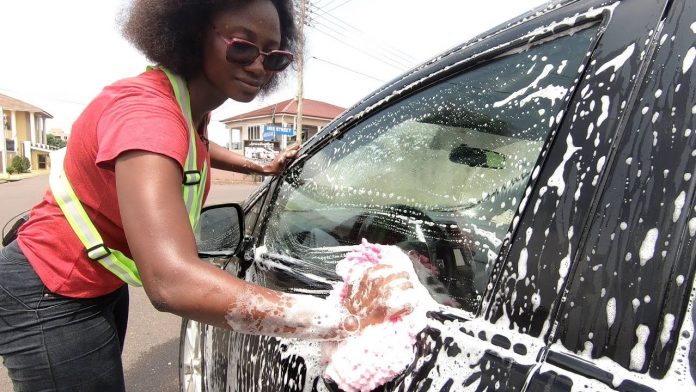 Does it matter most if or when a graduate does not necessarily find a white-collar job to do after searching for it with many attempts but rather tries resorting to other means of gaining an income?

Velika Mahama washing cars for people as a means of getting her daily source of bread should not in any way become a laughing stock for anyone who thinks being a graduate at all times, you must be working in an office full of air conditioning. According to Velika Mahama, a graduate of the University for Development Studies where she assiduously offered business development studies, she decided to go into washing cars to secure her funds for other prospects and to cater to the needs of her beloved family members who look at to her for financial supports and other pressing needs.

She narrated that after she graduated from UDS, she fervently searched for jobs with countless trials but to no avail hence her personal decision to resort to cleaning and washing vehicles for people to make ends meet with the sense that, she could not stay at home idle and hope that one-day manna would fall from heaven for her because she is such an individual who strongly upholds and believes in the spirit of adventurousness.

After all, a hand that does not work does not qualify for food even though she is a young lady but she does not allow that perception to have a toll on her personality.

It is always a reasonable thought to adopt pragmatic ways of solving our pressing needs and demands whereas not relying on others to come to our aid at all times because we must endeavor to try something else new if the other previous attempts made were not buoyant enough to creating you any meaningful financial gains, it is your personal decision to venture out into other profitable business development ideas that could equally put food on your table and that of your esteemed family members who always look up to you as their breadwinner in the family and the society as a whole.

The story of Velika Mahama should not in any way discourage or cause you dismay to losing hope for your foreseeable prospects but rather, it should inspire and motivate you to wake up from your slumber because as you are seating down there blaming the government that there is no job or work available in the system, bear it in mind that you are growing old every day and your wants and needs would come upon you suddenly like an armed man and you would be broken down beyond healing.

This story of Velika Mahama must be a wake-up call to those of you waiting upon government support or any form of assistance from other people that you look up to for help which may in the long run make you a slave and a dependent on others.

Wake up today from your slumber and try something new to emancipate yourself from mental imbecility as you always pray for better chances and opportunities to come into your life ignorantly and lazily without acting against delays and impediments that are hampering your financial breakthroughs.