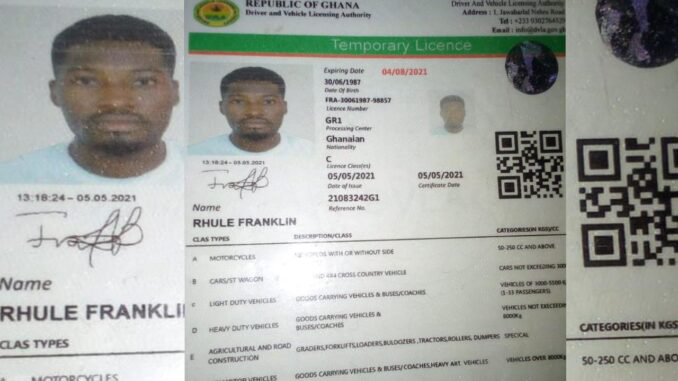 An armed robber is currently in trouble as the police have launched a serious search for his arrest in Takoradi. The armed robber moved to the hostels close to the Ahantaman Girls Senior High School at Ketan in the Sekondi Takoradi Metropolis to carry out his operation.

Apart from students at the Ahantaman Girls Senior High School, others from the University of Mines and Technology (UMAT) campus in Takoradi also live in the same hostels. The armed robber came with a taxi in the night to carry out the raid. With him were scissors, torchlight, cutter, and other weapons for the operation.

He moved from one hostel to the other and took the handbags, mobile phones, and other personal belongings of the students, but luck eluded him when one of the students suddenly wake up and saw the armed robber looting.

She shouted for help and others came around but the armed robber bolted, several efforts to find him by the students in the night proved futile.

But he left the taxi with registration number, WR 1220-19 at the premises of the hostel and bolted for his life. He also forgot a very important document that can easily lead to his arrest.

It is unknown if the documents represent his identity or not but a temporary driving license bearing the name, Rhule Franklin was seen at the scene. He also left a torchlight, cutter, scissors, a female voter ID card, and other weapons at the scene.

The Sekondi District Police Command has taken over the issue to unravel the person behind the robbery. The police are using the driving license to track him down. But it could be that the license does not belong to him and only picked it in one of his operations.

However, if it actually belongs to him, then he is doomed. Assembly member for the area, Mr. Kalsum Mingle confirmed the news and indicated that residents in the area including the students have for some time now been complaining about the activities of armed robbers.

The situation will require a strong security presence in the hostels to scare the armed robbers. It must be done as soon as possible to avoid the occurrence of bad news in the school.