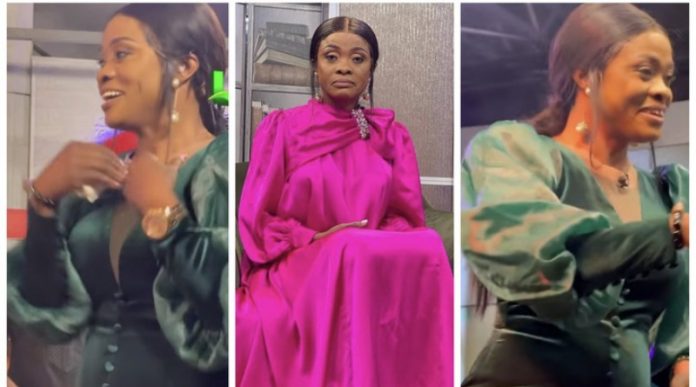 As she stepped in for Nana Ama Mcbrown on United Showbiz on Saturday, gospel musician Diana Asamoah was dubbed a record-breaking television show host by social media.

Diana Asamoah was invited as a guest host, as UTV has done since their main host, Nana Ama Mcbrown, took a sabbatical break.

She, just like other guest hosts, made sure the 3 hours show went smoothly and pundits got to discuss pertinent issues in the entertainment industry.

Diana Asamoah took her chance and step up the hosting game by being the first host to change her clothes twice on one show.

The gospel musician who has been in the news for since she’s developed a fashion sense decided to change clothes twice just to stay trending.

She wore a navy green gown with silk hands and later changed into a pencil fitting peach dress.

Social media users are applauding her improved fashion sense and her designer for styling the once old singer into a slay queen.

Diana Asamoah also cleared the air that her change in fashion doesn’t mean she has swayed away from the gospel of the lord.

She hammered that it only means she has upgraded and no longer a backward thinking Christians who thinks flashy things are from the devil.

Watch her in the shots below.